I teach composition at the local university.  I get 100 new students every semester, 97 of whom are terrified to take a college English class because they are certain they can’t write.  They are under the delusion that one either has an innate talent for writing or one sucks, the end.

But, as Rosalyn mentioned in her post “Writing Over Time,” for most people, talents take time to develop.  When I was five-years-old, I remember crying to my mom that I could never be a wife and mom, because all I knew how to cook was toast; I literally cried over this lack of skill to cook meals that I should have been born with if I had actually been destined to become a mother someday.

My mom insisted that by the time I was a grown up, I would be able to feed my family.  Lo and behold, I can now make lots of meals (including Italian food to die for, by the way).  But, I didn’t wait until my daughter was born to start to cook and then expect gourmet meals to appear on the table.  Over the years, I blew up a few things in the microwave, cracked some egg shells into the pan, learned that if a little sesame oil tastes great, a lot will NOT taste better, and set fire to some food in college learning how to use the broiler (note to self: the broiler does not work like a toaster; don’t put bread in and then go take a shower)… I learned bit by bit.  Just like I did with my writing.

One of the first things I have my students read every semester is (pardon her French) “Shitty First Drafts”  (I like to call them SFD’s) by Anne Lamott.  It is actually a chapter from her book Bird by Bird.  In the chapter, it talks about her job as a food critic.  Every month she would have an anxiety attack about her writing and finally would just write a SFD to get something on paper (what one of my grad school professors called “vomiting on paper”).  She was terrified that she’d die in a car accident between her SFD and her polished final draft and that then people would think that was the best she could do.

This usually helps students relax a bit.  It doesn’t have to come out polished on the first run, thank goodness!  I wish I had known this when I was a student.  How many times had I spent hours on a first paragraph (or a blank page) before moving on to the rest of the paper, because it wasn’t perfect yet?

The moral of the story: writing is hard.  It is a craft and it is painful.  Look at almost any professional writer’s take on his/her profession; they all say the same thing.  Douglass Adams (author of The Hitchhiker’s Guide to the Galaxy) said, “Writing is easy.  You just need to stare at a piece of paper until your forehead bleeds.”  That about sums it up for most of us, I think.

Now I just get any information I can on the paper, knowing I will have holes in my story, knowing some of the adjectives aren’t even close to the right ones, knowing some stuff will have to be thrown out (remind me to talk about that topic on my next post- dibs, ladies!).

I often vomit on the paper now and clean it up later.  There’s a visual for you. Now, go write your own SFD- see how liberating it can be!

Oh, and have a great holiday season, no matter which holiday you celebrate.  Here’s my Christmas card this year, mostly to get the vomit image out of your minds: 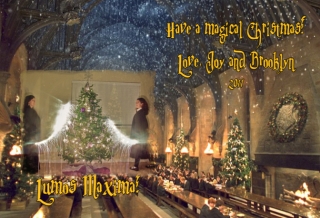 4 thoughts on “What Makes a Good Writer?”