Erin’s post yesterday offered a great primer on effective critiquing. Today, I want to build on her ideas to offer some specific strategies toward becoming an outstanding critique partner.

One of the most rewarding parts of the writing community is the support writers give each other, often through feedback and critique. I have been humbled and awed by the generosity of my fellow writers, time and time again.

But critiquing can be intimidating, particularly if you’re new to writing. It’s scary to give your precious words to someone else. It can be even more daunting to try to respond to someone else’s words–especially when you’re not sure what to say. Or how to say it.

In my other professional life, I’m a writing instructor at a university. I spend a lot of time giving student feedback. I’ve also taught classes to writing tutors, helping them learn how to give feedback to others. Needless to say, I’ve spent a lot of time thinking about and researching effective feedback.

Here are some things I’ve learned.

1. Pick your battles. You don’t have to comment on *everything.* In fact, getting a story back that looks like this often makes writers want to go and hide–not read your detailed feedback. 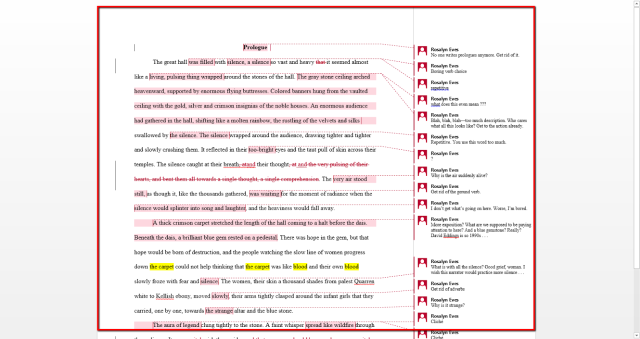 Choose those things that are going to help the writer the most. When I comment on student papers, I try to focus on 2-3 things per page, and then a closing comment that highlights two or three things I liked about the paper, and two or three suggestions for revision. This is a useful rule for beginning critiquers as well.

2. Focus on big picture issues. Since, in theory, our feedback will help the writer revise his or her work, it’s not always helpful to focus on surface issues or line edits. Instead, in early drafts, consider issues of pacing, characterization, plot, setting, and so forth. Word choice and punctuation can wait for the final edit.

3. Use Facilitative Comments Instead of Directive. What do I mean by this? Keep reading.

Directive feedback tells the writer what to do. It’s often brusque and dismissive, and research studies have shown that it’s far less effective than other types of comments.* Three common kinds of directive comments include

Negative Evaluation: This is pretty self-explanatory. Any comment that gives a value attribute to the writing: “This passage is boring.” “This prologue sucks.” “Your writing is awful.”

These kind of comments are easy. But resist them. Every time you make a comment like this, you wrack up negative writer karma points. And trust me, no one wants those.

Imperatives: Imperative statements tell the author what to do. Cut this sentence. Page break here. Format your paper with 10 point Comic Sans. Of course, sometimes writers do need to be told what to do–but phrasing your comment as a suggestion rather than an imperative often comes across much better.

Corrections. “Fixing” the prose. Sometimes writers do get things wrong and need readers to help them out. And that’s fine. But the majority of your feedback should not be simply correcting the text. That doesn’t help the writer in the long run.

On the other hand, facilitative comments focus on helping the writer help themselves in future revisions. If you’re not sure what kinds of things to tell your writer friend, consider these options:

1. Advice: If you have ideas, couch them as a suggestion instead of an order. For instance, “What about starting your story here?” instead of “This story starts in the wrong place. Start here.”

2. Praise. Erin mentioned the importance of positivity yesterday, but I think praise is often underestimated. My students are often as ignorant of what they do well as they are of their mistakes. Sometimes we don’t know our strengths until someone else points it out. I heard an author once talk about the first time she got feedback from her agent. He didn’t praise anything, so she assumed he didn’t like the things he hadn’t commented on and changed the entire story. Don’t do this to your friends. Tell them what you like.

But for praise to work, it has to be specific. It doesn’t help a writer to know they have a great character. But it might help them to know that the character is effective because she is funny and relatable, and to point to specific passages in the story where we see this about the character.

3. Questions. If you’re confused about something in the story, ask! Questions are often a non-threatening way of indicating a problem with the story–consider the difference between asking “Why did the MC decide to act this way?” versus responding “This is totally out of character. I don’t believe it.”

4. Reader Response. Probably the most valuable thing any beta-reader or critique partner can do is simply articulate their response as a reader: “This scene confuses me because . . . ” As authors, we can’t always gauge how readers are going to respond. If readers are responding in unintended ways, this may indicate a problem in the story.

5. Interpretive. In addition to articulating your emotional response as you read, sometimes it’s helpful to describe what you see happening in the story. For instance, “This character strikes me as moody and arrogant here, but that seems at odds with other presentations of this character. Was this intentional?”

The image below shows some of these facilitative comments in action (though you may have to zoom in to read them!)

Giving good feedback takes work and effort–but it’s definitely worth it. Not only does it let me invest in writer friendships that make my life richer, but I have learned nearly as much about writing from giving feedback as I have from actually writing.

What kinds of feedback do you personally find most helpful? What about most annoying? 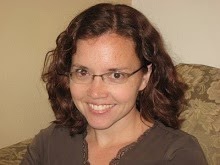 Rosalyn Eves is a part-time writer, part-time English professor, and full-time mother of three. She loves all things BBC, especially costume dramas and mysteries. When not wrangling children (and sometimes when she should be wrangling children), she’s often found reading. She’s currently working on a YA historical fantasy, set in nineteenth-century England and Hungary.