I’m not naturally an emotive person (though my  husband might beg to differ), or a hugely emotional writer. In fact, one of the most common notes I get from my writer’s group is: what did this character feel when this happened?

For me, adding emotion is something that I have to consciously layer in as I write.

But I’ve discovered a few tricks that can help writers (including myself) create a richer emotional response in readers. (Confession: most of these tricks actually have their roots in classical rhetoric, which argues that you can’t persuade a listener without swaying their emotion. They work surprisingly well in fiction too).

In Thank You for Arguing (the book I use in my college course on rhetoric), Jay Heinrichs argues that emotions are based on experience and expectation–particularly, our beliefs about what has happened and what will happen. The more vividly you can help an audience experience something, the more strongly they will feel. This means putting your readers in the character’s head as closely as possible (more on that in a minute), but it also means drawing on familiar emotions in potentially unfamiliar situations.

Take, for instance, this scene in Chris Crowe’s lovely Death Coming Up a Hill (told entirely in haiku). In this scene, the main character recounts how, at six, he discovered his parents don’t love each other. He’s just thrown his arms around his dad, and he wants his mom to join in a kind of group hug:

. . . I looped
one arm around Dad’s neck and
reached my other arm

around Mom’s. Feeling
their love for me, I tugged to
pull them closer, to

knit us into a
tight group hug, but Dad leaned right
and Mom leaned left, and

I spanned the distance
between them like a bombed-out
bridge.

A lot of readers might be familiar with a situation where their parents don’t love one another, but by using a vividly described and homely scene (a group hug) even readers who haven’t experienced this situation can feel the emotion in the scene.

2. Connect with the character through deep point of view

Deep point of view is basically an extension of the previous point. We feel more for characters when we are in their head–any time we’re reminded that we’re not in their head, we feel distanced from the characters and from the emotion in the story. Words that distance readers include “think, feel, saw, heard”–any words that draw attention to the observation of an action, rather than the action or thought itself.

Both Linda Clare and Chuck Palahniuk have excellent posts on how to improve deep point of view.

This one may seem counter-intuitive: if we want readers to mourn with the character, we should show the character weeping copiously, right?

If you’ve ever been to a public speech where the speaker wept openly, you’ll understand what I mean. Witnessing intense emotions often feels invasive, and most of us shy away from it. On the other hand, when we see speakers struggle with that emotion, we’re more likely to be moved. Cicero knew this. So do current orators and good storytellers. A few years back, I listened to Obama’s speech at the memorial for the Arizona shooting victims. When he got choked up–but did not actually cry–my own eyes filled with tears (which was hazardous, since I was driving on the freeway at the time).

If we see the character trying to resist a powerful emotion, it invites the reader to feel that emotion for them. This works not just for sadness, but for anger, frustration, a whole slew of emotions. The Writing Excuses podcast has a great episode that expands on this idea.

4. Don’t announce the emotion you want readers to feel

In Thank You for Arguing, Heinrichs argues that telling audiences what they should feel basically inoculates them against that emotion. If you tell listeners that you’ve got a joke, they’re less likely to find it funny. Telling them that your experience will make them so angry won’t actually make them angry.

Same thing goes for writing. I see this all the time with beginning writers in my writing classes, who want to make me feel the agony of some childhood experience by telling me it was “so sad” or “so tragic,” but ultimately I don’t feel sad or tragic. Instead of signaling to readers what they should feel by naming the emotion, invite them to feel it by describing the physical sensations of the emotion instead, or depicting an action that betrays the inner emotional state.

Take, for instance, this scene from Jandy Nelson’s I’ll Give you the Sun, where one of the main characters has narrowly escaped death by bully squad:

“I take out the charcoals from my back pocket. They somehow survived the ordeal in tact. I sit down and open my sketchbook. I black out a whole blank page, then another, and another. I press so hard, I break stick after stick, using each one down to the very nub, so it’s like the blackness is coming out of my finger, out of me, and onto the page. I fill up the whole rest of the pad. It takes hours.”

Without once labeling the emotion, Nelson allows us to get into Noah’s head, to feel the frustration and desperation he feels.

This should be obvious to any writers, but our language is saturated with emotions. Metaphors are even more powerful (Kenneth Burke argued that whole philosophies could be contained inside metaphors).

The simile here is a homely one, but it perfectly captures that sensation of lightness.

Obviously, there are exceptions that can be made to any of the tips above. But I’ve found them to be helpful in adding emotional layers to my writing.

What about you? What techniques have you found helpful for amping up the emotion in your writing? 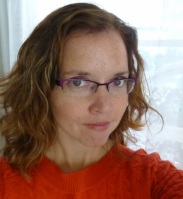 3 thoughts on “5 Tips for Writing with Emotion”