It is said that both the devilish and the divine can be found within the details. This is especially true when it comes to good storytelling, where details can make or break a story. The tips herein will help you focus on the right details so as to enrich your reader’s experience, and not overwhelm them.

Your readers need somewhere to start in your story; a baseline; a point on the X-Y axes from which to begin. Some details are therefore crucial, such as your character’s names, ages, and genders, and where the story is taking place. So if your main character is a thirty-seven year old man named Bob who owns a Laundromat in Houston, of course your readers need to know that. If you don’t provide these basic details early on in your story, you run the risk of your readers becoming confused, bored, or completely lost.

However, I think we can agree that basic details, while necessary, can be pretty boring. As writers, we have been trained to look for more interesting ways to describe the world around us, and the worlds we envision in our heads. Every writing class I’ve ever taken has emphasized the power of descriptive details in bringing life to a story. Knowing, for instance, that Bob has finally decided on fire engine red paint for the 1967 Corvette Stingray he’s been restoring in his garage for the past six years is a very nice detail that adds richness to your story and depth to your character. Let your readers smell the distinctive blend of chlorine and Coppertone that permeates the swimming pool. Let them taste how juicy and tender the filet mignon is at dinnertime. Let them feel the tears on your character’s cheeks after her marriage falls apart. 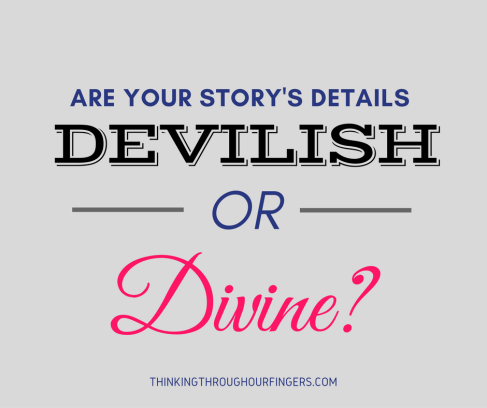 But know when to draw the line. You’re aren’t Herman Melville, and your readers don’t want or need a page and a half description of a wall or a couch. (Unless, of course, the couch has come to life, grown fangs, and is currently chasing people down the street. Then, by all means, go nuts with that description—and let me read it once you’re done!)

An example from an actual manuscript I recently saw in the slushpile may prove helpful. (Please note that certain details have been changed to protect the author’s otherwise good name. I present this as an example to learn from, not to embarrass anyone).

“Jane opened the door of her dusty green 1998 Toyota Corolla, got inside, and closed the door. She pulled the safety belt from over her left shoulder, across her body, and fastened it with a click down near her right hip. She adjusted the rearview mirror, and then inserted the key into the ignition and started the engine. She put the car into drive, pressed the accelerator, and the car slowly moved forward. She moved faster, turning left onto Elm Street, and headed east for three blocks, before stopping turning right onto Maple. Then she traveled south for four miles, until she saw the grocery store up ahead on her right…”

…And just shoot me already! While we have an extremely detailed picture of what Jane was doing, we don’t care one whit about her. If we haven’t fallen asleep by the end of that paragraph, we’re likely wishing something—anything—would happen to Jane. In this case, the author has given us plenty of details, but they’re the wrong details. We don’t learn much of anything about Jane, except that she is driving her car to the grocery store on the most boring day of her life. Why go to all the trouble to describe her car trip when absolutely nothing happens along the way? Maybe the author really meant to write, “Jane got in her car and drove to the store,” but got carried away in the headiness of the moment. We’ll never know for sure. What we do know is that this is a completely wasted car trip, and a missed opportunity for us to learn anything interesting about Jane. So let’s consider how we might change that paragraph, focusing on the right details, to make it work better.

First of all, the paragraph is boring because we, as the readers, already know how a car operates. We know the minutiae of getting in, buckling up, and starting a car—and it’s really tedious. We do it every day without even thinking. And even worse, Jane isn’t thinking about it, either. So we’re already annoyed at the author for showing us something we don’t care about, because it’s something the character doesn’t care about. What if, instead, we saw Jane fiddling with the radio, bouncing from station to station, until she lands on just the right song? That’s already more interesting, especially if we discover that Jane is listening to classical music, or 80’s, or heavy metal, or K-Pop. Each one of those musical choices will tell us something different and interesting about Jane. What if we heard some of Jane’s thoughts about the important meeting she has later that day, or saw her looking at the stale French fries on the floor, and telling herself for the hundredth time that she really needs to clean them out? What if we hear her kids fighting in the back seat, and can suddenly feel the migraine beginning to form behind Jane’s left eye? Any one of those scenarios has already made this paragraph more interesting, because they are focusing on the right details.

Similarly, what about Jane’s car is important for us to know? Did we really need to know that she was driving a dusty green 1998 Toyota Corolla? The author never explains why, and so it becomes another pretty useless detail to clutter up the story. But what if we were told that it was the car Jane bought when she was in college fifteen years ago, and that she’s just hoping it will make it through one more winter? If we could feel the engine struggling up the hill, or could smell the burning oil, or sense Jane’s anxiety as she keeps one eye on the temperature gauge, we’d have much more reason to go along on this car trip, because we’re now sympathizing with Jane.

A good rule of thumb to follow is this: unless it specifically tells us something about a character, or unless it moves the plot forward, we probably don’t need to a lot of details about it. Readers are smart people, and we can fill in the blanks. What readers need are the details that they wouldn’t ordinarily think of themselves. So, if it’s not absolutely necessary that we know the make, model, and year of Jane’s car, you can probably leave that information out. If, on the other hand, Jane is driving the fire engine red 1967 Corvette Stingray that she stole from her ex-husband Bob’s garage, and is cranking some heavy metal music as she roars down the road? Feel free to describe the heck out of that image!

This rule also applies to all sorts of details, including clothing. If you tell me that your main character is a 15-year-old girl, I probably don’t need to know that she prefers hoodies and jeans—you know, like many 15-year-old girls do—unless that reveals something important about her. If you tell me that your story takes place in Wisconsin in January, you don’t need to spend a lot of time describing how everyone is wearing parkas and snow boots. I’m going to assume that’s the case, because I understand what January in Wisconsin is going to be like. I promise your readers will not envision your characters running around buck nekkid just because you haven’t described their clothing all the way down to their socks. (On the other hand, if your character really is running down the street in their birthday suit in Wisconsin in January? You’d better tell me that, because that story just got WAY more interesting!)

Focusing on the right details will make all the difference in your story by adding depth and richness. Furthermore, it will show your readers that you not only care about them enough to not overload them with stuff they don’t want or need, but that you respect their intelligence. And that is perhaps the very best thing an author can do for their readers. 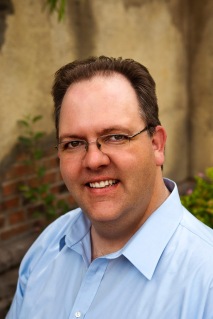