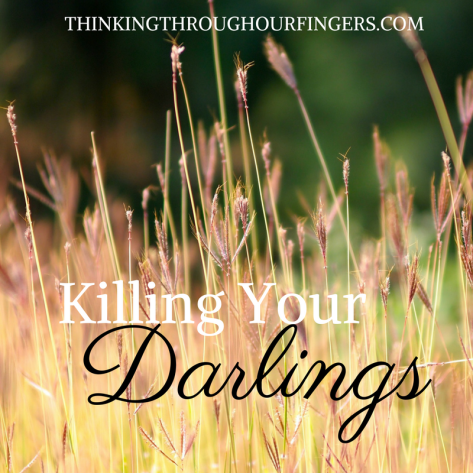 Cal. Hector. Aimee. Jessica. They had to go.

“Kill your darlings.” I’ve heard this phrase bantered about in writers’ circles.

While I had a vague idea of what it meant, it wasn’t until the developmental edits of my second novel, BEFORE THE RAIN FALLS, that I full understood what William Faulkner intended when he coined the phrase.

Sometimes it means taking out the purple prose. The overuse of flowery language. Instead of “She took a hot bath,” one might over-describe: “She sank into the scorching waters, tempered only by the frigid reception she’d received from her husband when she returned home, but the cloud-like bubbles that overflowed like foam angels soothed her feelings as she sank cocooned into the enamel-clad iron claw foot tub that was her respite.”

In my case, it meant the actual killing off of four characters. Not that they die in the book – it’s that they never made it past the edits.

My developmental editor suggested that they were superfluous to the story.

As writers, we put so much into our manuscripts and our characters, so the suggestion of elimination is, at first, horrifying. You want me to do WHAT to them?

But I let the suggestion percolate. And one by one, I saw her wisdom.

If Cal was mostly a device to solve a situation, was there someone else – a character who already existed – in the protagonist’s circle who could serve the same purpose? Yes – there was! And the re-write of that character’s role suddenly became emotional and poignant.

Was it necessary to name a character such as Jessica for such a minor role, elevating her to someone of greater importance than she was? No – it wasn’t! And in taking her out, I found that one of my main characters could fulfill the same role and oh my gosh – a new story twist emerged now that she inhabited that space.

Since Aimee was merely a reference, could she be eliminated, forcing me to make my main character stronger on her own merits rather than as a contrast?  Yes! Snip, snip, there goes Aimee.

And Hector. He was a tough one. I was convinced that he needed to be there for tension. And taking him out meant some pretty serious editing because he was present in a lot of scenes. But in trusting my editor, I began to see that by taking out his drama, I was able to enhance the drama between two other characters, and even create a parallel theme to the other storyline that was happening.

In rereading my final copy, I could only sit back and say “wow” at the before and after. Because of the nudges from my developmental editor to make these very difficult decisions, the story became much tighter, much more profound, much more focused. I honestly can’t imagine adding any of them back in.

I learned this lesson the hard way, but it has informed my writing ever since. I’m currently at work on book #3 and it is so much more streamlined from the start. Gone are the unneeded characters. I question the importance of each one. As if they have to justify their own existence.

Trial and error. Those can be the best teachers. And in this case, that teacher was my editor.

So thank you, Cal, Hector, Aimee, and Jessica. You will at least be immortalized through this blog post, serving a purpose entirely different than what you were created for. And I’ll remember you always as I kill future darlings. Or maybe never write them in the first place.

Camille Di Maio is an award-winning real estate agent in San Antonio who, along with her husband of 19 years, enjoys raising their four children. She has a bucket list that is never-ending, and uses her adventures to inspire her writing. She loves finding goodies at farmers markets (justifying them by her support for local bakeries) and belts out Broadway tunes whenever the moment strikes. There’s almost nothing she wouldn’t try, so long as it doesn’t involve heights, roller skates, or anything illegal. “The Memory of Us” is Camille’s debut novel. Her second, “Before the Rain Falls” will be released on May 16, 2017.