A few months ago, I sat in front of my computer and stared and stared at my manuscript, hoping that something would start talking to me soon because I had a deadline to meet. This wasn’t an abnormal thing. Staring at a Word doc (or Scrivener doc) while time passed and still no words were written had become more common than not, and I remember thinking, “Okay… I think this is it. I’ve completely lost the ability, talent, and passion… desire… mojo… whatever you call it, to write.”

I started to reminisce about the times when I would ache to write. The story would unfold so quickly in my head that my fingers itched to get it on paper. I’d spend hours nonstop typing, completely submersed in the characters’ world, oblivious to the real-life stresses around me. It was my escape, my coping mechanism, my utopia.

And then I went from aspiring writer to published author.

I hate complaining about the “after publishing” parts of the journey, because I know how it feels as a writer who isn’t. I was snapped up by one of the Big 5, had an agent, had several book deals coming in… this is what I’d been working toward. This was the dream! So when I saw the authors who posted about the woes, the stresses, the pressure that follows, I’d secretly think, “At least you have a book deal.”

So, I apologize right now for being blunt about it. But getting a book deal is only the beginning of the next, very difficult journey that comes with writing.

Tangent, sorry. Back on track! So, while I was at my computer, contemplating ways that I could still make money and give up writing, I realized that this wasn’t just a fleeting thought of “I give up” that I’d had so often but never acted upon. This was the real thing. I was done. I would meet this deadline and then I’d only be an editor. I ran the editing business, and it was profitable—more-so than my writing—and so maybe that’s what I was meant to do. 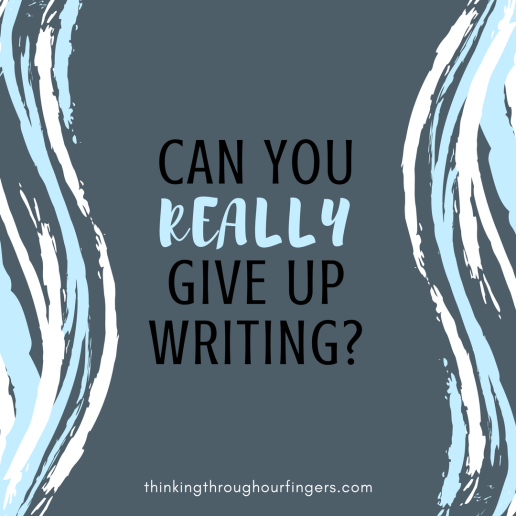 They say when you are ready to give something up, you know it’s the right then when you feel relief. And boy, did I feel it. It washed over me like I’d been dipped into a nice warm bath. I was free again. I knew that this book would be my last.

About a month later, I was getting ready for the Storymakers conference—very big writer’s and reader’s conference in Utah—and being on the committee, I felt a little bit of a fraud. Sure, I’d published quite a few titles and I was attending as not only an author and committee member, but a vender as well for my editing business. Yet, I still felt like I was a walking false advertisement. During my counseling session that I’d been taking weekly for anxiety/depression, those thoughts came up. I was given the advice to let those thoughts go and just enjoy being there. So I made every effort to do just that.

Like I said before, I was done. Writing was gone and over, and I would focus my efforts elsewhere. I was relieved, I felt like I was on a path to healing…

There was this small part of me that missed it. Whenever I was editing for one of my clients, I could feel it there. I could sense that desire to create, to make something out of nothing. I pushed it away, convincing myself that I’d made the right choice.

During the conference, my anxiety had been alleviated. I really was able to just sit back and enjoy. And because of that, I was able to really listen, really take in all the juicy, writerly goodness that comes from it. When the amazing Ally Condie gave her keynote address, I felt she was speaking directly to me.

“Write in the light,” was the message. Write what comes, not what you think you have to.

It hit me right in the feels, you guys. That, paired with the message of not living in the crevasse on your way up to the writing summit, ignited that passion I’d thought had long burned out. I came home filled to the brim with the desire to write. To tell a story, not to make money, not to meet a deadline, not to please the readers I was so desperate to please, but to tell the story I needed to tell.

I was my pre-published self again, writing past midnight, thinking up scenes on my morning walks, never staring at the screen, but itching to put down the words in my head. It’s been about a month, and I’m still going strong, because I think I’m looking at writing differently now. I feel it differently now.

There are many times we want to give up, that we aren’t sure if it’s all worth it, but after having gone through the drafting stage, the querying stage, the getting an agent stage, the subbing stage, the publishing stage, and the rinse and repeat stage, I’m just now realizing that it’s not about getting to the next thing and hoping that’s when it will all be rainbows and roses.

It’s about your story.

You have something unique and genuine to bring into the world, something only you can create. And even when you feel like you just can’t do it anymore, and you feel that relief like I did when you decide to give up, know that it’s okay to set it aside, but acknowledge it is a part of you. It can always come back, sometimes when you need it most.

10 thoughts on “Can you REALLY give up on writing?”