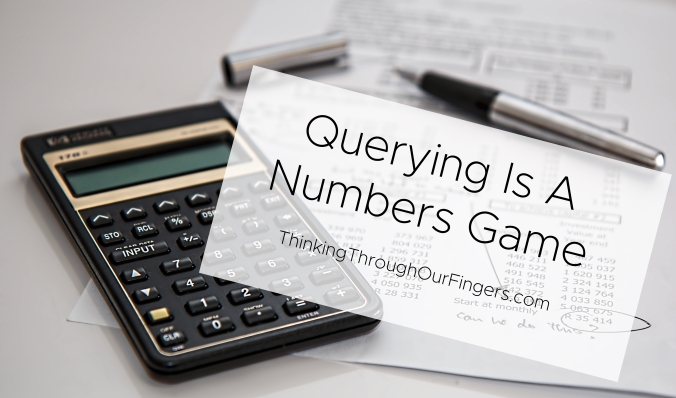 The internet is filled with resources on how to query, how many queries to send at a time, and how to write a query letter. But today I want to talk about something that I haven’t seen discussed nearly as much:

Let’s start by talking about job applications. I know, totally unrelated, right? But bear with me here for a minute. My husband graduated from college in 2010, with a degree in computer programming. Because programming is a field with immense turnover and an average employee job length of three years, and because he’s done a few years of contract work, he recently started his fifth job in that space of time. Some of these jobs have come without much effort or application, but some of them have come after months of intense job searching.

In the latter situation, when he’s actively putting out applications to companies he doesn’t have connections at already, we’ve discovered that it takes a certain number of applications put out in the ether before things reach a critical mass, at which point things really start to move and he finally ends up with a job offer.

In my experience, querying is much the same. If you pay attention when writers who’ve recently signed with an agent share query stats, you’ll notice that much of the time, they’ve sent at least fifty queries for that book—and often much more than that. I know a fair number of talented writers who’ve signed with big-name agents… but only after they’d sent a hundred or more queries.

While preparing for this post, I asked a group of agented authors about how many queries they sent before signing with their agent. The responses ranged anywhere from 4 to 125. For those who went on to sell that book, there also was no correlation between how many queries an author sent and how quickly the book sold to a publisher; many of the ones who sent the most queries sold within weeks, while some who sent the smallest number of queries got the largest number of publisher rejections. It’s also pertinent to know that for many of these authors, the book that ultimately landed their agent was not the first book they’d queried.

Personally, I sent 43 queries on my debut, which is a fairly small number for my track record—and the only reason it was so relatively few was because I got an agent very quickly after the first #DVPit contest, which made things move much faster than they otherwise would have. On the book I queried before my debut, though, I sent more than 110 queries in total before finally shelving the book.

Why am I sharing all these stats? Because so often, I’ll talk to aspiring authors who are feeling overwhelmed by the query slog and hear that they’re considering shelving books after a relatively small number of queries. Many shelve before reaching the 50-query mark, and a good number shelve even before that, at 30 queries or less. But if you consider that the vast majority of authors send several dozen queries before signing with their agent, and some send a hundred or more, shelving a book when it’s been seen by such a relatively small number of agents isn’t giving the book a true chance.

Viewing querying as a numbers game also helps take the personal sting out of rejections. When you query expecting to have to send out a lot, it’s easier not to get attached to each individual agent you send to, and easier to move on again if you receive a rejection.

1. How do you know you’re not just throwing away your queries on a book that’s not strong enough?

The answer to the first question is a matter of pretty simple game strategy. I’m a small-batch querier: I typically send 5-10 queries at a time (usually closer to 5, since sending queries takes time!), then wait to see if I get requests from that. A 20-25% request rate while I was querying was usually my sign—if I had that many requests, I could be fairly confident that my query was working well, so I sent out more. I’d send out one or two more queries every week or two, provided I was still getting requests. Over several months, I’d build up to the point where I had a few dozen queries out in the world—at which point, I’d start to get responses on the fulls I’d sent out to the early requesters. Full rejections can be a perfect time to pause, evaluate feedback given, and figure out if it’s time to revise before moving on with more querying.

2. How do you even find that many agents?

Since I write young adult and middle grade, my favorite resource when I’d get ready to query a new book was the Literary Rambles blog, which has a database of literary agents who represent picture book, middle grade, and young adult titles. I also would make note of Writer’s Digest New Agent announcements, check the acknowledgments of my favorite books or Google my favorite authors to see who represented them, and pay attention when my friends talked about the agents they were querying. I also highly recommend QueryTracker as a resource to track and organize queries. For my first queried book—which got sent to only a few agents because it was clear early on that I wasn’t getting any requests and I’d had specific feedback from several industry pros saying that my book just didn’t stand a chance in the current market—I literally kept track of the agents I was querying on a sticky note. I do not recommend that!

So, if you’re querying and starting to get discouraged because you’ve hit twenty, thirty, forty queries—or much more—without an offer, take heart! Remember just how many successful writers didn’t land an agent until they’d sent out a lot of queries. Take those rejections, archive them, eat some chocolate… and send out more!

Cindy Baldwin is a Carolina girl who moved to the opposite coast and is gamely doing her part in keeping Portland weird. As a middle schooler, she kept a book u

nder her bathroom sink to read over and over while fixing her hair or brushing her teeth, and she dreams of someday writing just that kind of book. Her debut middle grade novel is forthcoming from HarperCollin’s Children’s in 2018. Find her online at www.cindybaldwinbooks.com and on Twitter at @beingcindy.

6 thoughts on “Querying Is A Numbers Game”