“We aim for the point where everyone who is marked for death, dies.”
– Rosencrantz & Guildenstern Are Dead

My wife and I have been working our way through a TV series recently, and one of our favorite characters just died. (I won’t mention the name of the show or character, so as not to spoil it for those who have not seen it). This character’s death did not come as a complete surprise to us. The storm clouds had been gathering around him for a while, as it were, and there had been hints that he wasn’t going to make it out alive. From a narrative standpoint, his personal story arc was pretty much over, with nowhere left to go. It really was his time to die.

Nevertheless, his death still was still difficult to witness, and not just because it was a rather violent and shocking death. We mourned the loss of this character because we had been following his story since the first episode. We had watched him struggle and grow as a character, and we felt like we knew him-in many ways, even better than other characters on the show did. We liked him, and we miss him. His absence in the story after his death is as significant as was his presence beforehand.

I know that you know exactly what I’m talking about here. Even now, you’re thinking of the death of one of your favorite fictional characters, aren’t you? I’ll bet you can still recall in vivid detail where you were when that character died. It’s fascinating to me how we can feel genuine grief over the loss of someone we intellectually know was never alive in the first place. But they felt real to us, didn’t they? Such reactions are evidence of good writing, and the sort of connections that all storytellers hope to create with their audience. 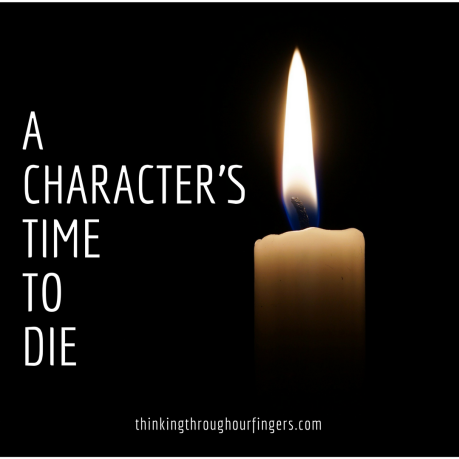 Death is one of the most powerful tools writers can use to impact their readers. The death of a character can elicit a range of emotions, ranging from anger, fear, and sadness, to catharsis, joy, and even humor. (Admit it: you laughed when the Boba Fett fell into the Sarlaac and it burped).

As I have reflected on the death of this particular character, I’ve come up with five lessons about using death as a tool to strengthen your storytelling.

1. His death was earned.

You remember on Star Trek, when Captain Kirk and his crew would beam down to an alien planet. Everyone knew that Kirk wasn’t going to die, and neither were Spock, Dr. McCoy, Sulu, or any of the main characters. But those unnamed security guards in the red shirts? Yeah, we all knew they would be the first to go. And what’s more, we didn’t really care. Their only purpose in the story was to be cannon fodder or monster chow.

This character wasn’t a red shirt. He had earned his death-or rather, the powerful emotions that came from it-because we had known him from the beginning of the story. We had invested time in learning his story, and thus his death had meaning to us.

2. His death had meaning to other characters.

It wasn’t just us as viewers who were upset when this character died. Part of the emotion of the moment came from seeing how the other characters in the story reacted. We mourned his death partly because we saw his friends mourning, and we knew what he meant to them.

Death will always bring with it a certain shock value, especially if the reader doesn’t see it coming. Much of the horror genre depends on the tried and true “jump scare” type death, or the “who’s gonna get it next?” approach. But gratuitous deaths, or deaths for their own sake, will never carry the same weight or meaning that the death of a solidly developed character will.

3. His death moved the story forward.

This character’s death came at a critical point in the story, and his death served as a primary motivation for the other characters going forward throughout the rest of the story. Virtually everything that happened thereafter in the plot was directly or indirectly related to his death.

Death is a powerful motivator, and is often what sets the hero off on his or her journey. It’s the death of Uncle Owen and Aunt Beru that motivates Luke Skywalker to leave home and go with Obi-Wan Kenobi. It’s the death of Mufasa that causes Simba to run away from Pride Rock. In fact, Disney has built an entire empire on the corpses of dead parents, few of whom ever even make it out of the prologue.

But while a death near the beginning of a story can be a natural reason for your character to start their journey, it’s by no means the only place where it can happen. Lenny isn’t killed in Of Mice and Men until the very end of the book, for instance, because in that case, the whole story has been leading up to that moment in one long crescendo. The same holds true for Old Yeller, and Where The Red Fern Grows, where the story is about the loss of one’s pets.

4. His death reflected his life.

He got to go out in a blaze of glory of sorts, voluntarily sacrificing his life to save three of his friends, including his best friend. This was in keeping with how this character was during his life, constantly looking out for and protecting his friends. His death therefore felt natural, and even right.

The manner of death should also fit the tone of the story. It’s best not to include a gruesome or graphic death in a story that has been fairly tame thus far. William Wallace’s death in Braveheart-where he is hung, drawn, and quartered-is gruesome, epic, tragic, and inspiring all at once, and is perfectly in harmony with the tone of the rest of the story. Such a death would feel out of place in

Even a death that feels random and even senseless can be impactful if that is the story you’re telling. In The Walking Dead, pretty much anyone can die at any time, without warning or fanfare. That’s the reality of living in a zombie apocalypse-death is always right around the corner, and that sense of fear is what the story is all about.

5. His death was remembered.

In the next episode, the other characters hold a wake, and they each put remembrances in his coffin. Each character is given a chance to say their goodbyes and pay their respects. It’s somber and formal, and very cathartic for everyone involved, including the viewer. It’s our chance to say goodbye as well.

When people die in the real world, we eulogize them. We remember their life and honor their death. Character deaths need a similar eulogy. When a fellow hunter dies in Supernatural, Sam and Dean Winchester give them a “hunter’s funeral,” full of meaning. When Gandalf drops off the bridge of Kazahdum with the Balrog, there isn’t time to stop and fully remember him until the Fellowship arrives safely at Lothlorien, where Sam composes a poem about Gandalf’s fireworks while the elves sing a lament.

This doesn’t mean that there has to be a formal funeral service for every character death, but there should be at least a moment sometime where other characters can reflect and remember their loss. The Wolverines in Red Dawn take time to carve the names of their fallen friends on a rock before moving on with their war. Wilbur the pig is saddened by Charlotte’s death, but is happy seeing all her children living on.

Death is a part of life, and will always be so. It’s quite natural to incorporate death into our storytelling, and we should. Because part of the reason we tell stories in the first place is to keep memories of those we love alive for future generations. In this way, stories have the power to transcend death itself.