I have always been a line-level writer. I live for poetic prose, for dazzling descriptions, for the sentences that make you feel like you’re sipping something delightful as you read. I love writing that makes you see the world differently, that pulls you so deeply into its narrative that you can’t seem to leave that fictional world once you’re done. I love authors like Laini Taylor and Maggie Stiefvater, who have such a deft touch with phrasing that their books are not only engaging, they are positively delicious.

Recently I got into a discussion with some friends on Twitter about how to find the line between pretty prose and purple prose. Purple prose, in case you haven’t heard the phrase before, is—according to its Wikipedia entry—”text that is so extravagant, ornate, or flowery as to break the flow and draw excessive attention to itself.” So how, exactly, do you know when you’re writing something that would be classed as literary or lyrical, and when you’re veering into purple prose?

If you’re trying to write lyrically, it’s important to realize one thing: quality over quantity. True lyricism is a mix of plainer, more serviceable lines with lines that stand out and sing. If each line of your book is filled with metaphors, descriptions, and ten-dollar words, your story will quickly sink under its own weight.

Last month I read and loved Sandhya Menon’s bestselling young adult debut, When Dimple Met Rishi. One of my favorite lines from the book was this: “His eyes reminded her of old apothecary bottles, deep brown, when the sunlight hit them and turned them almost amber.” Can’t you just feel that description? Yet Menon’s followup is much simpler: “Dimple loved vintage things. She followed a bunch of vintage photography accounts on Instagram, and old apothecary bottles were a favorite subject.”

Notice how that first line is deeply poetic, verging on the fanciful; it uses description, an unusual metaphor, the striking image of sunlight through brown glass. But immediately, Menon grounds us back in the real world, with short sentences that give us the information without any adornment. If those lines had been as long and vivid as the first one, it would have taken so much longer for us to get to the actual crux of the scene—which would have brought us perilously close to purple prose, because…

2. Purple prose takes us out of a story.

The goal of truly great writing is to make the reader forget that they’re reading a book. As authors, we want our readers to be fully present inside our stories, to be so immersed in our characters’ worlds that we’ll feel disoriented when the book ends. Vivid, lyrical writing is a fantastic tool in our arsenal when we’re doing this—but if we overdo that vivid writing, it has the opposite effect, yanking us right back into the real world. Have you ever been reading a book and then found yourself stopping and thinking something like Good grief, I didn’t need to know that much about her dress or What does that scene even have to do with anything? Chances are, what you were reading could fall under the umbrella of purple prose.

I’m a highly descriptive writer, but I’m also a firm believer that description should be part of the lifeblood of your novel, not something that you intentionally break from your story to spend time on. Each time you use a descriptive passage, ask yourself: What is this accomplishing? Good description does more than just telling us what a person, place, or thing looks like. Good description heightens the book’s atmosphere, or gives us insight into a character’s thoughts and feelings, or even hints at character backstory. There are a lot of things that never really need to be described in a book—character clothing rarely matters, the precise layout of a house isn’t usually important, even what a character looks like can be mostly left up to the imagination. Vivid description, like poetic prose, is best used like salt: A sprinkle here or there to bring the flavor out on food, but not enough to overwhelm. Our readers shouldn’t spend more time noticing our descriptions than they do living in our novels.

3. Prose turns purple when you set out to impress.

Look, we’re all writers, right? And as such, it’s likely that we’ve spent a fair bit of our lives reading, building extensive vocabularies, and taking classes that have taught us all manner of cool literary devices. And let’s be honest: Sometimes it can be tempting to show all that off. But when we write with the intent to impress—even sometimes if we write with the intent to innovate—we often end up producing things that no person in their right mind would want to read. For an extreme, but still relevant, example, I turned to a source of unending purple prose… stuff I wrote as a teenage girl. Back then, my best friend and I played frequent letter-writing games, the first of which was a story between two Regency girls who wrote letters that were, well, about what you’d expect from two fourteen-year-olds trying to write in a Regency style.

Here’s a gem from one of those letters: “Our dear windowseat, I feel, will be such a place of endearment that when it comes time for us to spread our wings, we will shed many a tear over the parting of it and ourselves.”

Ridiculous, right? I mean, what I was angling for there could’ve been substituted with a simple “we really like this window seat, we’ll miss it when we get old.” But while I’m grateful to think that most mature writers won’t fall prey to quite such flights of fanciful language, the things in this sentence that make it ridiculous are sins of which seasoned writers can be just as guilty. When we replace words, drag our sentences out mostly for the sake of having longer sentences, or try to write in a way that neither feels nor sounds natural to our own writer voice, we fall victim to the dreaded purpling of our prose.

4. Prose can also become too purple if our authorial voice dominates our character voice.

Last week I got some editorial feedback from my marvelous agent on my latest book. One of the things that she mentioned was that she felt there were a few times where my writer voice leaked in to my character’s voice a bit too much—the book is about an eleven-year-old who can be described as lower middle class as best, and who isn’t shown to have a particular gift with words, but I have occasional moments like the one where she describes a fellow student’s hat as “unfathomable, in this kind of heat.” Though I totally hadn’t noticed it before my agent pointed it out, that is much more the kind of thing that I, not my protagonist, would say. When we allow our own vocabulary and aesthetic to interject when they’re not consistent with our character’s attributes or worldview, our attempts at lyricism fall flat and pull the reader right out of the story.

There is no hard-and-fast rule when it comes to avoiding purple prose, and some of it simply comes down to taste. Some readers and writers prefer stories that are told simply, with clean, spare writing that avoids fancy devices. To these readers and writers, anything that ventures into the realm of the poetic is going to feel over-the-top. More than once, I’ve heard somebody criticize a book that I loved by saying it was guilty of purple prose.

Still, for those of us for whom vivid language and careful wordsmithing is just as important as crafting a strong plot, it’s worth giving the matter some thought! A few resources I found helpful as I prepared for this blog post: 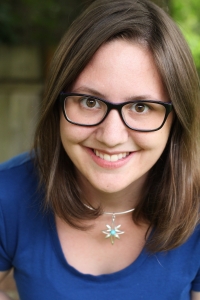 Cindy Baldwin is a Carolina girl who moved to the opposite coast and is gamely doing her part in keeping Portland weird. As a middle schooler, she kept a book under her bathroom sink to read over and over while fixing her hair or brushing her teeth, and she dreams of someday writing just that kind of book. Her debut middle grade novel, WHERE THE WATERMELONS GROW, is forthcoming from HarperCollin’s Children’s in 2018. Find her online at www.cindybaldwinbooks.com and on Twitter at @beingcindy.