It creeps under doorways, rises through vents, incorporating everything and everyone in its path, zapping them of energy, physical and mental. It’s a destroyer of focus and productivity, causing its victims to write at a snail’s pace, stare at blank screens, and abandon projects. I call it the Sludge, and I’ve been trying to wade through it for ages now.

I briefly escaped it when I traveled across the country to write in a cabin with a bunch of other writers (several of whom were also traveling to escape the Sludge.) I hoped that maybe while I was away, the Sludge would get bored and move somewhere else. But no, it had waited patiently back at home, and was there to greet me again when I returned.

I tried to convince it to go with threats of Camp NaNoWriMo word counts, but it laughed in my face and gave me the flu. It knows I can’t write when I have the flu. Then the dreaded Spring Break arrived and the two teamed up. There’s no wading through a combo of Sludge and Spring Break—what was originally the thickness of molasses hardened into clay. I’ve written very, very little during the last three weeks.

There’s a trick to fighting the Sludge though, if you’re patient. You know how in old movies, the protagonist would fall into quick sand, and the more they struggled, the deeper they would sink? Eventually they would realize that if they stopped struggling, they’d float back up to the top where they could reach a vine or outstretched hand that would bring them back to safety. The Sludge is kind of like that. The more you stress about how little you’re writing, the harder it becomes to write, until eventually, you’re not writing at all.

I’ve found that I do better if I stop thinking about it much. If I just ride along on the surface of the Sludge and let it carry me to wherever it’s trying to go, it will eventually float me to a branch that I can use to pull myself out. I stop worrying about word counts, and just ask myself if I’ve written at all that day. Or heck, if I’ve even opened up my document and looked at it, if I’ve thought about it at all while showering or doing the dishes—if I haven’t abandoned it completely, that’s good enough for now. And eventually, if I keep at it in just such a way, the Sludge will slink away for a while and let me get back to work.

Have you ever been taken over by the Sludge? How did you handle it? Or, if you’re currently trudging through it, I hope this has helped you to know you’re not alone, and eventually, you’ll find your way back out. 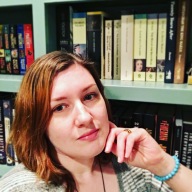