I’ve always been a pantser. Always. I don’t plan my stories out at ALL before writing them – I start out with a basic concept and let the characters and plot unfold as I go.  Even in elementary school, when they introduced the concept of pre-writing and story boarding, I would do the absolute minimal amount of work that I could get away with on the assignment because I hated doing it so much. Hated it with a passion.

Partly this is because, to me, outlining has always intimidated me. Somehow being able to figure out everything about a story before I’ve written a word of it seems like an impossible task. What’s plot pinch one going to be? I don’t know! I haven’t written it yet! I’ll find out when I get there! But I’m sure if I just sat down and thought about it, I could figure it out. So though intimidation is a reason, it’s not the MAIN reason. No, if I’m being truly honest with myself, the main reason I don’t outline is because I’m impatient. When I have an idea I’m excited about, I want to dive right in and make it happen. I want to see my entire story come to fruition, like, yesterday. I want to close my eyes, and think at my computer and have all the beautiful images in my head magically appear as words on the screen, instantaneously. Quick, before I forget where I was going with that plot thread that gave me such an adrenaline rush only moments ago.

Obviously, this is impractical, not to mention impossible, so the next best thing for me has always been to just start writing. And you know what? That worked with my last manuscript. There were many chapter do-overs and a whole mess of revisions to do, but it worked. Eventually. It has worked with short stories as well.

That’s not the case this time. Nope, now I sit down to write and I just . . . I don’t know where to take the characters next. I need a PLAN. So I’m doing the thing that I’ve always hated. I’m making myself take the time to outline—thoroughly—before charging ahead with my draft.  And you know what? I’m (ugh, this is hard to admit) I’m really, sort of, um, well . . . okay fine. I’m enjoying it.

You guys. I think I might not be a pantser anymore.

Wow, that was hard to say. But I get it now. I really do. It’s taken me a long time to learn, but I understand now why plotters outline. I’m not saying that it’s a better process. But it’s a DIFFERENT process and worth a try if whatever you’re doing right now isn’t working for you.

After much research (ok, skimming some articles here and there on the internet because, like I said, I’m impatient), I’ve found that there are many different ways to outline your novel. The method I’m using sort of developed organically as I combined a few different things and fiddled with them . . . I guess you could say, I pantsed it. Basically, I outlined in steps. If you want to give it a try, here’s how you do it, the main idea being that you start with broad strokes, then layer in the details. 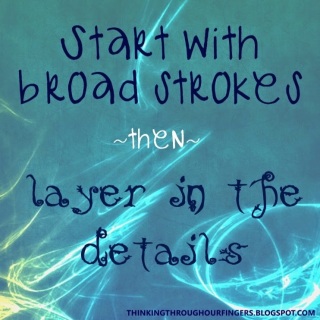 That’s Character, Conflict, and Resolution. Who are your main characters? Is there a villain? Who is it? What will the protagonists have to overcome? And how do you want things to be resolved by the very end? Boom, that’s it. If that’s all you need, stop right there and go write. I needed more than that, so I moved on to . . .

Next, download some beat sheets and fill them out. I started with Blake Snyder’s “Save the Cat,” then used that to fill out the more detailed “Master Beat Sheet” that combines “Save the Cat” and Larry Brook’s “Story Engineering” beat sheets. They and several others can be found here.  Again, I started with broad strokes, then layered. I almost stopped here, but after thinking about it, I decided I still needed a bit more guidance.

Once you have all your main plot points and beats figured out, start planning out your chapters. I used outlining mode in Scrivener because it lets me view multiple bits of information pertaining to each chapter at once without it feeling cluttered or overwhelming. I’ve set up columns for the POV (I have two POVs to keep track of in this one, and I want to make sure they get equal attention), chapter name, chapter summary (or the goal of the chapter if I haven’t figured out how that goal will be reached yet), my word count target, (or what range it should fall within according to the beat sheets), and the beat or section of the story each chapter falls under. You could probably do this with an Excel sheet as well. Here’s a screenshot of what mine looks like (with spoilers covered up):

That’s as far as I’ve gone at the moment. After this, I might go into each chapter and do a more detailed sequence of events. Or I might just start writing. I haven’t decided yet. But the main thing to remember, and the thing that I think was my sticking point before, is that even after all this, the outline can be changed. If something happens as I’m writing that makes me want to take the story a different direction, I’m not stuck with what I’ve already planned. I can re-adjust things. So in the end, there may still be a little bit of pantsing going on. I like to think of it as pantsing with a plan. Yes, I know that doesn’t make sense, but it makes this pantser feel better, okay?

Have you ever had to make a dramatic change to your writing process? What did you do? Did it work?