So you have an important scene coming up—one where your character’s emotions really need to come out and shine. You have the actions, you have the dialogue, you have the moments of inner contemplation . . . but the scene’s still missing something. It needs more oomph, more . . . something. Something to really get the reader into the character’s head. What is it? What else can you do?

Well, you could use symbolism. Try using external details like the weather, the colors of a room, a particular object, or the actions of surrounding characters to enhance and play off your main character’s mood and really get your reader sucked into the scene.

There are two ways you can do this. You can use symbolism that is congruous to the mood you want to showcase, or symbolism that is dissonant to it to really make those emotions resonate and stand out. Some examples below:

The trick with using symbolism that is congruous to your character’s emotions is to make it work with the character by intertwining it with their actions. For instance, I recently wrote a scene where, at the end, my character finally lets down her guard and cries about the death of her father in front of a boy she’s developing feelings for. I use the weather (an impending rain storm) and an object (an umbrella) to help add depth to this emotional scene. While reading, it may not be obvious that that’s what I’m doing (I hope—and to be honest, I didn’t even realize I was doing it until afterwards, which always makes me feel like such a genius. Haha. Ahem), but it’s there just the same. It’s drizzling as my characters start down the path through the woods, and by the time they reach their destination, it’s pouring. At the same time, due to the conversation along the walk and various other things that I won’t go into here, my character breaks down and begins to cry. And when the boy she’s with pulls her in for a hug, she drops her umbrella—she’s also dropping her guard. Get it? Get it? Yeah? Genius here. Yup.

In my summary of this, the use of rain = crying sounds super obvious and trite, but if you’re subtle about it, weaving it into the scene and only pointing it out when necessary, but also giving it a point (they end up running back to the house to get out of the storm, and are stranded there together . . . alone . . . until it passes) it will only serve to enhance, not detract. I swear. Trust me.

Okay, so what do I mean by that last one? Let’s say your character is at the park. It’s a beautiful day, kids are playing, couples are picnicking, dogs are playing fetch. Everyone is happy . . . except your character. Your character is very unhappy. She is broken inside. Everything hurts. (There’s that first example coming into play—cheerful environment contrasted with extreme sadness). But your character isn’t focusing on her own emotions right now, or so she thinks, because she’s just now noticed a burnt out tree in the middle of this park that appears to have been struck by lightning not too long ago. She’s now going to hyper-focus on that tree: how the bark is blackened and scarred. How its leaves are singed or missing. How there’s a ring of burnt grass surrounding it. Yet the children play on, skipping around it as if it isn’t even there. Don’t they notice it too? Doesn’t anyone see this damaged, hollow, dying tree right in front of them? Then, just to add insult to injury, a dog trots over to it and lifts his leg. I don’t know. Play around with it. That tree is your character’s mood personified.

Adding symbolism to your scenes can be both daunting and fun. Sometimes you’ll come up with it during the drafting process, sometimes it’s easier to add in later. Sometimes you’ll even add it in accidentally. Just don’t overuse it, because symbolism can be powerful stuff. Keep it for the really important, really emotional scenes. And most importantly, have fun with it! 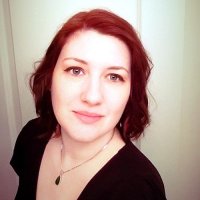