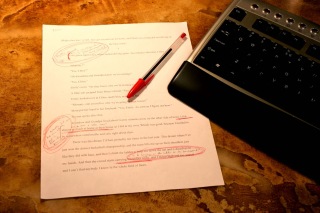 Writers crave many things–publication, success, validation–but those who are serious about really developing themselves as writers crave feedback just as much. And not just the pat-on-the-back, I-loved-every-syllable kind of feedback, but honest and sometimes painful feedback, as long as it’s given with care and the intent to help. I’m talking about these kinds:

“I didn’t have enough reason to care about your main character.”

“The plot really dragged in the middle.”

“I can tell this part is supposed to be funny, but it really isn’t.”

“This big moment of discovery feels pretty contrived and forced.”

“Your story starts in the wrong place. You should probably just rewrite the first four chapters.”

I’ve had variations of all of these things said to me, and after the initial “ouch”, I’m so grateful for them. Because in every single case, my feedbackers have been right. And when I make the main character more loveable or amp up the plot or make the funny part actually funny, the story is stronger.

I’m lucky enough to have two great groups of feedbackers: a critique group and beta readers. My critique group meets together every two weeks to critique each other’s projects 10-15 pages at a time. My beta readers read the whole manuscript when it’s completed and semi-polished and give feedback on the entire thing, both the big stuff and the small stuff. And I do the same for them.

Writers can pay for feedback. There are freelance editors who are extremely talented and lovely and will help a writer fix everything in her book from large to small. But it would be a mistake (and really expensive) to rely entirely on this kind of feedback, because it elminiates half of the learning process: giving feedback. It’s incredibly instructive to figure out what works and doesn’t work in others’ writing.

If you don’t have feedbackers yet, don’t despair! There are lots of great sites like cpseek where you can connect with other writers. So find your feedbackers and be a feedbacker! Your manuscript will thank you.