Each year, around Christmas time, the district administrators come to each school to shake each teacher’s hand. We usually know the day they are coming, but not the time.

A few years ago, they came into a colleague’s class to shake her hand. While she was visiting with this small group of people for a few minutes, her class stood, formed a line and proceeded to go through all the administrators. As you can imagine, the students were giggling the whole time, the district administrators obliged, and my colleague was horrified.

Later, she wrote a single word on the board: decorum.

A few days ago, I was asked to finish teaching a music class that I normally accompany as the regular instructor had a dress rehearsal at the same time. In the transition, the students (ages 9-14) lost their minds a little and were messing around, plucking on string instruments when they should have been listening, talking when I was. I requested they hold their instruments in rest position and told them about this word they needed to know: decorum.

Okay, you may be saying, what does this have to do with me? Or writing?

Say you are offering a critique on something that needs tremendous work. Instead of saying, “I didn’t like anything about this first part” you could explain “The story really picked up here”.

Or what if you get a bad review that makes you want to toilet paper the reviewer’s house? Decorum says you say nothing online, and if the review or critique is face to face, the words out of your mouth are always, and only, “Thank you.”

I recently entered a contest where people provided feedback first for a pitch, and second for the first 250 words. They didn’t charge for this contest, and every entry got three to four critiques. Some authors took to twitter telling the critiquers how wrong they were, that they didn’t understand the story, that they were obviously not qualified to give feedback. 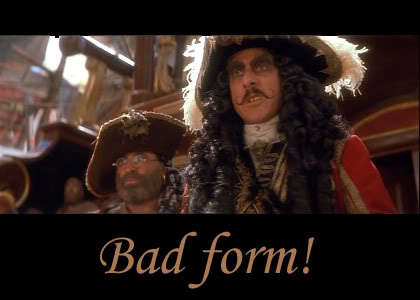 Never mind the fact that the writing world is extraordinarily small and word travels fast. Never mind that these people are trying to help progress a work, striving to direct the writers to a path of greater success. There will always be critiques that we don’t agree with, but that is a quiet off-line conversation with trusted readers, not ever something to be vetted for the world to see.

But it goes beyond that. Decorum says you don’t interrupt a conversation. I attended a panel at a conference a few years ago and one person interrupted EVERY SINGLE PANELIST. Constantly. The hurt and frustration was clear on the other panelists faces, but it was also very uncomfortable for the moderator and many in attendance. And due to a lack of this author’s decorum, I have sworn I will never buy even one of their books.

But that decorum needs to be practiced in critiques as well. I have attended events as conferences where several people were assigned to a group to give and receive feedback on the first ten pages. Each time, there is one person who interrupts when it isn’t their turn to critique, and tries to defend everything the other readers have to say that isn’t a glowing praise of perfection. As you can imagine, the desire to say anything else decreases very quickly, and that author literally misses out on what they paid for.

As spring and summer progress, so does the opportunity to attend writing conferences, author events and the like. I would like to suggest that the first thing we pack in our bags is decorum – remember the work that goes into events, the considerations of the people teaching the classes, the efforts provided for critiques and feedback, and hand out the expressions of gratitude at least ten times as often as pitches, business cards and bookmarks.

One thought on “Decorum”