Recently, to celebrate the 10th anniversary of Twilight, Stephenie Meyer released a gender-swapped version of the story called Life and Death. My reaction to this news was somewhere along the lines of stunned silence followed by, “What? You’re kidding, right?”

And I don’t think I was the only one.

But, no, this was not a joke.
Anyway, out of curiosity, I picked up the book and, to my surprise, the story works. In fact, I like Beau much more than Bella even though they are essentially the same person. In Beau, the love of reading and books like Wuthering Heights seems more quirky than the same trait in a woman. The dislike of the cold gives Beau a vulnerability where the same trait in Bella made her seem whiney.

It’s really got me thinking about how something like a gender switch can make a familiar story feel entirely different.

Several years ago I went to see the play Wicked. To my initial disappointment, Elphaba that night was played by the understudy. My disappointment didn’t last long because the girl was a fabulous singer and an amazing actress—she blew me away. But what I really loved about the performance was an interesting, and unusual, element that stemmed from the understudy’s small stature, especially when compared to the statuesque blonde playing Glinda. 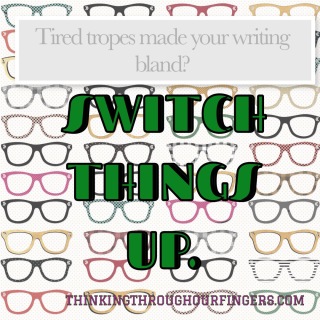 In writing, especially when we feel like our stories are missing a certain spark, it’s important to take a look at what tropes we’re using and see if there’s something we can switch. It doesn’t mean gender-swapping and rewriting your novel, but can even be as simple as changing up some character traits. (Switching up character traits works especially well if you’re using archetypal characters.)

So go ahead. Switch things up. Have some fun playing around with your story and have a happy holiday season!

Jenilyn Collings loves to read and write things that are humorous or romantic (preferably both). She has worked as a dental researcher, a florist, a martial arts instructor, and a tracker at an alternative high school (she’ll leave it to your imagination what that entailed), but she’s now focused on writing and child wrangling. A long time resident of the Mountain West, she recently moved to New England with her family where she is gaining an appreciation for umbrellas, fall colors, and turning lanes while driving.