When I was a high school English teacher, one of my favorite lessons was about the romanticizing of villains. I usually taught it with The Odyssey, when Odysseus asks his men to bind him to the mast and plug their own ears with wax, but not his because he wanted to hear the song. If successful, he would be the only man alive to describe what the song sounded like.

Teens would read this section struggle: a song that makes people want to kill themselves? How dumb does a person have to be to see the shores lined with bones of people and not figure out that jumping in the water might not be the best idea.

So I brought in some external help. The first is an obvious choice: “Siren Song” by Margaret Atwood. The last part of it reads,

…Shall I tell you the secret
and if I do, will you get me
out of this bird suit?

with these two feathery maniacs,
I don’t enjoy singing
this trio, fatal and valuable.

I will tell the secret to you,
to you, only to you.
Come closer. This song

is a cry for help: Help me!
Only you, only you can,
you are unique

at last. Alas
it is a boring song
but it works every time.

At this point, the girls would say, “Well of course. Guys are macho idiots who feel like

they need to save the world.” We’d explore that a little, talk about the elements of society that conveyed this expectation to men in Ancient Greece and men of today.

But getting the girls to understand how someone could be tempted when they knew a thing was dangerous was more difficult. They often thought that it was only dumb girls who fell for such things – caricatures of women that exploited a single nuance.

That’s when I’d play “Music of the Night” from Phantom of the Opera, allowing them to read the lyrics along with listening, words that include:

“Softly, deftly, music shall caress you
Hear it, feel it, secretly possess you
Open up your mind, let your fantasies unwind…

“Floating, falling, sweet intoxication
Touch me, trust me, savor each sensation
Let the dream begin, let your darker side give in…

Of course, when they are listening to an incredible tenor voice sing these words, they are swooning in their seats. The guys in the room would look around, raise eyebrows, pull faces.

Closer examination of the words shows that the feeling of romance that Phantom is able to portray is not the kind of thing that level-headed, intelligent women would fall for. And he’s not subtle about his intent: he is a master in seduction, dangerous and dark.

“But the way he sings…” my students would argue.

“Agreed,” I’d say. “The way he sings, his “siren song” of sorts is what makes listeners dismiss the danger, ignore the metaphorical skulls on the shore and want to jump.”

If you’ve had much life experience at all, you’ve probably had an occasion to reflect on a time when you did something, stayed in a relationship with someone, allowed yourself to be tempted in a way that hindsight revealed to be less than you best moment. At the time, you may have even had the sense of awareness that what you were doing wasn’t the best thing you could have been doing, but the enticing way that the thing was presented made it easy to cast aside good judgement. 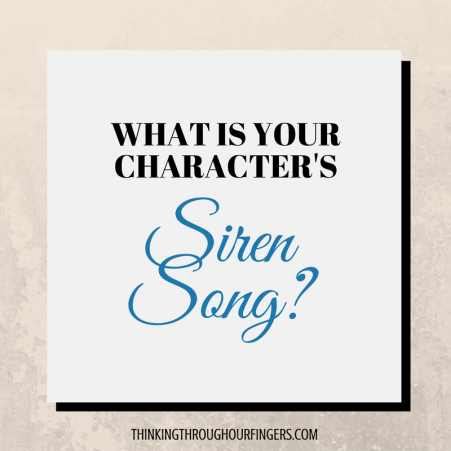 This is absolutely something that must be present if you write stories with physical protagonists and antagonists. But temptation doesn’t fade away just because the antagonist is perceived instead of seen. Well-rounded characters have to have flaws, things that prevent them from skipping merrily along through a plot.

In short, they need to have their own kind of a siren song.

To figure out what your character’s weakness is, to understand their temptation that is leading them away from what they should be doing, consider the following questions:

What is the thing that could lead your character into temptation?

Often, this can be determined by age group, as the fundamental goal of books tend to be:

Middle Grade: the desire to fit in

Young Adult: the desire to stand out

New Adult: the desire to “make something” of themselves

Adult: reconciling the past or present to improve the future

Obviously there are sub-genres within each of these, but stripped down to the very basic elements, most of the plots showcase these qualities.

With Christine in Phantom of the Opera, she wants to sing, to be the star, to have her place on the stage. Phantom has helped her already, and she is left to wonder how much better she can become if she keeps “working” with him.

For Odysseus, he wants to be known as a hero, as a leader who has seen and survived, and as someone to can tell the tales of greatness.

To fully have the antagonistic force in a story bear the appropriate amount of weight, the way to get what is wanted has to seem like a good idea – maybe the only idea.

What does the character TRY to do to a little bit resist the temptation?

Odysseus is known as being wise: he was the initial thought creator of the Trojan horse. Readers can see this wisdom still present as he understands the dangers of the siren song, ordering his men to stuff their ears, ordering himself to be bound to the mast. Though arrogant in his desire to hear, he doesn’t dismiss his intelligence completely.

Even after Christine has been sort-of seduced by Phantom, she is also aware that he isn’t all the way normal, and tries to seek out his real identity. Upon recognizing the danger he presents, she tries to negotiate how to still pursue her dream and not put the people she really loves in harm’s way.

Depicting the complication a character is feeling in making a decision or follow a path is what makes them more enticing, more readable, more real. 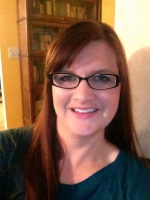 Tasha Seegmiller is a mom to three kids and coordinator of the project-based learning center (EDGE) at Southern Utah University. She writes contemporary women’s fiction with a hint of magic, and thrives on Diet Coke, chocolate and cinnamon bears. She is a co-founder and the managing editor for the Thinking Through Our Fingers blog as well as the Women’s Fiction Writers Association quarterly magazine, where she also serves as a board member. Tasha is represented by Annelise Robey of the Jane Rotrosen Agency.

2 thoughts on “What is Your Character’s Siren Song?”