Can we all just agree that the last two weeks have been the worst? I mean it. No matter what side of the political debate you fall on, the aftermath of this election has taken a toll on all of us.

I’m not here to get political, but I do want to address this toll and the effect it has had on our writing. Many—MANY—of my friends and colleagues have expressed how hard it has been for them to write lately. Many haven’t been able to write at all. I’ve seen several posts over social media bemoaning the looming end of NaNoWriMo and how behind everyone is because the election stress threw such a wrench in their ability to focus.

I’m one of them. At 22,000 words, I’m over 10k behind where I should be right now. I have massive amounts of writing to do if I’m going to hit 50k by the end of the month. I could just give up. I mean, it’s just an arbitrary contest. It’s not like my career is hinging on whether I can write 50k in 30 days. And everything else going on in the world right now feels much more important to me than finishing my draft.

Besides, I’ve failed NaNo before. Several times before. It’s not a big deal. But here’s the thing: at the beginning of this month, I made a promise to myself that I was going to REALLY DO THIS this time. I was going to finish this novel this month, come Hell or high water. Well . . . some might argue that Hell and high water are here, and now I’m struggling to keep my promise. I do still want to reach my goal, but when it comes to actually sitting down to write? I . . . don’t wanna.

I. Just. Don’t. Wanna. I mean, I do, logically. But I don’t have the mental energy for it. I’d rather take a nap, thank you very much, and hopefully not wake up until the year 2020 has come around.

Despite this, however, I’ve been managing to push myself through this writing slump, and so I thought I’d share some tips for how to get words down, even when you just don’t wanna.

1) Allow yourself a few day’s break

This seems counter-intuitive. “Wait, so in order to get yourself to write, you . . . didn’t write?” Yup, I didn’t write. I gave my brain and emotions some time to try and work themselves out, with the promise that after a certain amount of time, even if I still didn’t feel like I was in a place where I could write, I would try to write anyway. That day came, and I turned off all social media, and told myself I couldn’t get back on until I’d written 4k. And amazingly, I wrote 4k. I’m still not sure how, but I did. And you probably can too if you really set your mind to it. But first allow yourself that break.

2) Break it down into small chunks of time

Not words. Time. You’ll probably surprise yourself by how much you’ll get written in that small amount of time. One thing I’ve done on days when I’m especially having trouble focusing, is I’ve set my alarm to go off once every hour. When it goes off, I drop whatever I’m doing (or not doing, as the case has been lately) and write for five minutes. If I hit flow, I’ll keep going. Sometimes that’s all it takes. It’s like a little shove on the back of the sled to get you to the start of the slope. Once you’re there, your sled will tip, and gravity will carry you the rest of the way down.

I’ve become quite the fan of writing via dictation, and the bulk of my NaNo draft has actually been written via this method while I’m doing other boring tasks, such as folding laundry, picking up clutter, and waiting in the carpool lane to pick up the kids from school. Somehow, for me, I’ve been finding it easier to break through the I-don’t-wannas this way. It’s not for everyone, but if you haven’t tried it yet, I recommend you do.

Set aside some time every day to work on something else creative and/or relaxing that has nothing to do with your draft. Adult coloring books are great for this. Also crafts, such as knitting, crochet, or other needlework—basically anything that relaxes you but also stimulates the creative side of your brain. Sometimes when I do this, I’ll find my mind wandering off to work on my story without me, solving plot problems, coming up with new characters, all while in a nice, relaxed, state of mind rather than while stressing out over a blank page.

If none of this works for you, and you just can’t do it, don’t beat yourself up about it. Stress is a nasty beast that sometimes takes longer to defeat than we would like. Allow yourself the extra time you need. Take care of yourself. Eat healthy, go to bed at a decent hour, and take lots of bubble baths. Your ability to write has not left you forever. It will come back when it’s ready.

I do hope these strategies help you as much as they’ve been helping me. I will point out that they don’t work one-hundred percent of the time. Some days I just have to throw in the towel and admit that writing isn’t going to happen. But even if it works only a third of the time, that’s better than not at all. Also, if you have any tips of your own, please do share them in the comments. I’d love to give them a try. 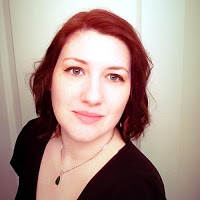 When she’s not writing, revising, or banging her head on the keyboard (it’s all the same, right?), Megan Paasch can be found playing her ukulele (badly), knitting (rarely anymore, unfortunately), or herding two amazing, but rowdy little boys (pretty much constantly) with her husband. Megan lives in the Pacific Northwest and holds a B.A. in History from the University of Washington. (Go Huskies!) Her favorite history subjects were, and still are, Women in History, the Tudors, and the Celts. You can read more about her here.