Shortly before Thanksgiving, I received the first (of likely many) edit letters for book two in my upcoming trilogy. I responded just as I had with the previous edit letters–by promptly closing down my email browser and not opening the attachment for several days. Something about several pages of densely written text brings out my inner coward. 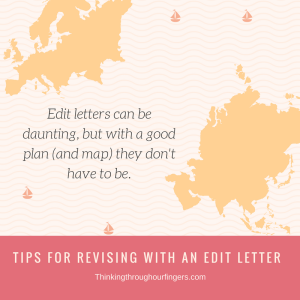 A few days later, I finally gathered up the courage to read the actual letter. It wasn’t as bad as I’d feared (my fellow debut authors have been sharing horror stories of friends who have had to completely rewrite book two, as has happened to at least one of our contributors). Still, eight pages of single-spaced text, all but one of them detailing what needed to be improved in the story, can be daunting.

My actual edit letter, plus notes

I can’t claim to be an expert in edit letters, but after receiving approximately half a dozen, here are a few things I’ve learned.

1.  Remember that your editor wants you to succeed

Pretty much everyone I’ve talked to agrees that the first response to an edit letter is, “why would you buy my book if so much was wrong with it?” But the truth is, if the editor bought your book, it’s because they saw something they loved so much that they fought for your story. They want the book to be just as successful as you do. (If you’re working with an editor you hired, the same is also true–they want the book to be better!)

2. After you read the edit letter, put it away

No matter how terrified you are of that letter, at some point you have to actually read it. But once you’ve read it, put it aside. Don’t do anything with it for a few days. Really.

Most writers need time for their brain to absorb the criticism and suggestions. If you dive in too quickly, you risk feeling overwhelmed or writing while you’re still defensive. I find that if sit with an idea for a few days, I realize that, as usual, my editor was a genius and this will make the book much better.

This might seem to be a no-brainer, but sometimes my tendency is to jump right into revisions without rereading first, and I find this only makes my task more difficult as it’s harder to hold the whole story in my head. But when I reread, I only read. I might make comments or notes on places that need to be fixed, but I resist the urge to revise as I go. I’m looking for a sense of the story as a whole, and I try to approach it with a reader’s eyes.

Once I’ve got a sense of the story, I make a plan for the revisions. This plan may differ from writer to writer, but I find it much easier to deal with the overwhelming feeling of the edits if I know how I’m going to tackle my revisions.

Some writers like to start with the easy fixes–like, a character’s name changing half-way through the draft. This can be a nice way to ease into revisions, since it gives you a feeling of accomplishment.  Here’s how I tackle revisions:

4a. Break up revisions into categories

If the draft was particularly rough or the revisions particularly long, I might need to make more than one revision pass. I find it helpful to divide the revision suggestions into categories: plot, character, setting, etc. and do one pass for each. (More on that here ).

4b. Use a scene-by-scene revision grid

I find it really helpful to map my story out when I revise. For each scene, I include the basics of what’s happening, whose point of view we get (if there’s more than one), what the character’s goal is, the central conflict, the purpose of the scene, and ideas for revision.

This lets me identify which chapters might be lacking in terms of conflict or narrative function. It also helps me see where I can address each of my editor’s comments before I actually tackle the writing. In the margins, I make notes about the changes I need to make in each chapter, and use the notes as I revise.

Yes, it’s a time-consuming process. But figuring out the changes I want to make before I start helps streamline the revision. It also, in cases where I don’t yet know how to fix a problem, gives my subconscious mind something to mull over as I work.

If you’re interested in trying this kind of revision, here’s a copy of the word table: revision-form.

What tricks have you found that help you tackle major revisions? 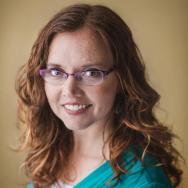 Rosalyn Eves is a part-time writer, part-time English professor, and full-time mother of three. She loves all things BBC, especially costume dramas and mysteries. When not wrangling children (and sometimes when she should be wrangling children), she’s often found reading. Her debut novel, BLOOD ROSE REBELLION, is coming March 2017 from Knopf/Random House. She’s represented by Josh Adams of Adams Literary.

One thought on “Tips for Revising with an Edit Letter”