When I first started writing novels I learned about a fun concept from Dave Wolverton at Writing for Young Readers in his fantasy class. (I also workshopped the start of my first novel. Holy Hannah! It was a drecky mess.)

He called it Triangulation. But, basically, it’s how to make things really bad for your main character, a way to come up with a plan to wreck and ruin his life. Completely.

Oh, aren’t we writers just horrible? (I ask this as I rub my hands together in a menacing fashion. Also, I might have let out a bit of evil laughter. But only a little. My children are sleeping, after all.)

Now, what would a brilliant concept be without a fancy shmancy chart to explain it? 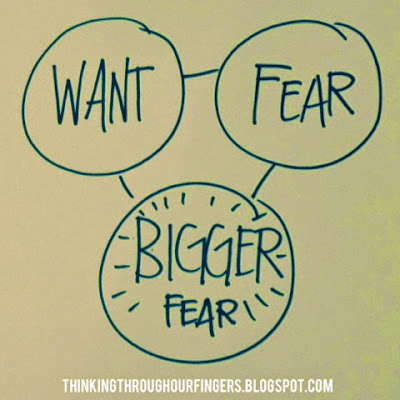 Isn’t that lovely? It’s obvious I spent loads of time preparing it, right?

So, this is the idea that there is something your MC wants and there is also something he fears. But what actually happens to him (or what he fears MIGHT happen) is much worse than his original fear.

Let’s say your MC wants to live a full and happy life more than anything and his greatest fear is dying. What is worse than dying? Quite a few things, I imagine, but one of them could be becoming a slave.

Or your MC wants power and they fear being weak, being a nobody. What’s worse than that? How about ruining countless lives in a quest for power? Yep. That fits.

What if your MC wants to belong, wants to have a family or a group of good friends. And your MC fears being an outsider and being alone. What’s worse? It could be pretending to be someone he’s not in order to belong. That could work.

Or maybe my greatest wish and dream and hope is to have five minutes where no one asks me for something to eat. (This is highly unlikely when you have six kids. Especially if one of them is a teenage boy.) And my greatest fear is that someone will ask me for another snack and I won’t be able to enjoy a brief moment of peace. What could possibly be worse than this? How about the baby dumping a whole giant bag of cereal all over the ground? And then trying to walk through it and breaking down into a sobbing ball of misery in the middle of it because it hurts his feet to walk on the crunchy food? Yeah, take my word for it. It’s worse.

Now it’s your turn. Is their triangulation in your WIP? Can you see this concept at work in some of your favorite novels?

Erin Shakespear writes middle grade fantasy full of quirky creatures, magic, and strange adventures. With six kids, her days are full of quirky creatures, magic, strange adventures, and…loads of diapers. She also likes to dabble at photography, sewing, jewelry-making, and pretending she’s a grand artist. She is the southern Utah coordinator for the Society of Children’s Book Writers and Illustrators. She often turns into a sobbing ball of misery when she has to do dishes. Or deal with laundry.

One thought on “Triangulation (a.k.a. How to Make Your Main Character a Sobbing Ball of Misery)”