So far this summer, I’ve been drafting a new project, rejoicing as my word count goes up and not worrying in the slightest about messes and holes I’m leaving along the way. But soon, I’ll receive a new round of edits and it will be time to revise. Again.

Revision is the time to clean up the messes you’ve made, and for many of us, it’s a time to rejoice when the word count goes down. Often this involves axing entire characters and scenes, killing subplots, or any other variety of painful, violent things. If this is what the story calls for, you absolutely have to do it. But there’s another method that often gets overlooked, and, when combined with the bigger cuts, can help tighten your writing and decrease your word count. 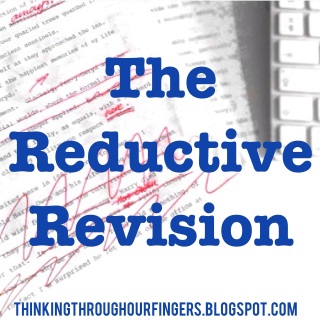 The term I use for this is the reductive revision, and I first read about it here. Since then, I’ve recommended a reductive revision to almost all my critique partners and beta readees. I’ve also used it on every single one of my own manuscripts.

A reductive revision is a careful pass through your entire manuscript, looking for every extra word and superfluous sentence. It’s ruthlessly and repeatedly asking yourself, “Is this word/phrase/sentence/paragraph absolutely necessary? Is it moving the story forward in any way?” If the answer is “no,” cut it. (If you’re doing it right, the answer will be “no” hundreds of times.)

There are small things to look for, including:

So what does a reductive revision look like? With my critique partners’ permission, here are a couple of passages from the pages we sent for our last meeting, both before and after a reductive revision. Keep in mind that these are brilliant, advanced writers (as you’ll see), and they still have words that can be cut!

Here’s the first one:

He’s staring at me with blatant suspicion. Looking down his nose at me like I’m just some punk on a bike who has no business being here. I hunch over the handlebars and try not to glare at him, but my head fills with self loathing because that’s not too far off the mark. (54 words)

There are a few things here that could be considered redundant. The “blatant suspicion” and “looking down his nose” cover mostly the same territory. The head filling with self-loathing can be stated more succinctly (and maybe more closely to this character’s voice as well), and modifying this part just a little will also remove a reference to the characters head, which is always a good thing. (Heads, hearts, chests, stomachs…) Note: There are times to use repetition for emphasis or voice, but use it sparingly! <– Says the girl who has a tendency to use it too much.

So if we make these changes:

He’s staring at me with blatant suspicion. Looking looking down his nose at me like I’m just some punk on a bike who has no business being here. I hunch over the handlebars and try not to glare at him, but my head fills with self loathing because that’s hating that he’s not too far off the mark.

We end up cutting roughly a third of the words without losing any of the meaning, characterization, or story:

He’s looking down at me like I’m just some punk on a bike who has no business here. I hunch over the handlebars and try not to glare, hating that he’s not too far off the mark. (37 words)

Okay, here’s another, from a different author and story:

Her phone rang. Glancing down, Sophia saw it was Emma’s name and hit the button to ignore the call. Two more times, Emma’s name appeared on the screen, each receiving the same reaction. (33 words)

There’s not much here that’s redundant, but it can definitely be trimmed. In this case, there are excess  words describing things readers will be familiar with, and shorter, more abrupt sentences might serve even better to underscore the main character’s actions of cutting her sister off.

So if we make these changes:

Her phone rang. Glancing down, Sophia saw it was Emma’s name and hit the button to ignore the call. Emma. Twice more, Emma called, and twice more, Sophia sent her sister straight to voicemail. Two more times, Emma’s name appeared on the screen, each receiving the same reaction.

Again, the passage is roughly a third shorter, and nothing has been lost. There’s even a little repetition in there, but I’d argue that it works in this case, and the passage is better for it.

The cuts won’t be this severe everywhere, but I’ve never read a manuscript that didn’t have fat to be trimmed. Making a pass through your whole manuscript with this specific purpose in mind will make for a tighter story that’s easier to read and harder to put down.

What do you think? Have I cut too much? What other cuts would you suggest? Do you have other suggestions for trimming these passages, or for reductive revisions in general?

Elaine Vickers is the author of LOST AND FOUND (HarperCollins, 2016) and loves writing middle grade and chapter books when she’s not teaching college chemistry or hanging out with her fabulous family. She’s a member of SCBWI and represented by Ammi-Joan Paquette of EMLA. You can find her at elainevickers.com on the web, @ElaineBVickers on Twitter, or generally anywhere there are books and/or food for her consumption. 🙂

6 thoughts on “The Reductive Revision”