My wife is an avid reader. When I say avid, I mean that this woman goes through at least 3-4 books a week. She reads pretty much any genre out there as long as it’s fairly clean. The one thing that I like being married to an avid reader is hearing her many pet peeves about authors. Why? Because hearing those pet peeves, helps me avoid them. I am going to touch on the one pet peeve that was driving my wife nuts a few weeks ago. It came to the surface because it wasn’t just one author that was having these issues. It was about 4! Her pet peeve: messy character naming. 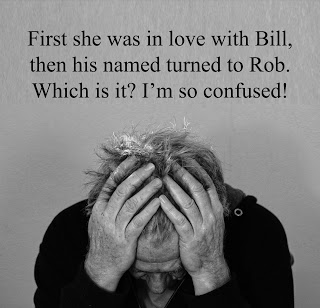 I’m just going to come out and say that I too have had a problem with this before. Luckily for me, it was caught by both my wife and editor before I sent the book to anyone else. I had named one of my side characters Greg in previous chapters and then named him Henry in another. In my case, I actually wrote a whole scene in the wrong name and then jumped back to the original name I had before. Crazy messy, I know. It’s not that I set out on trying to confuse my readers I just got mixed up. It happens to the best of us. But what can we do to avoid messy character naming?

One thing that I do now is create a character list of all the characters I have in a book. When you get into a series, that list can get HUGE. That is why it is so-o-o important to keep track of these things in the beginning. I think it is important to list not only their FULL names (you never know if it will come up—I also include nicknames) but also their appearance and traits. This is what my character lists generally look like:
Main Characters (taken from The Dream Keeper Chronicles):
Side Characters:
As your story grows, so will your list. Just remember to update it. I not only have a list for main characters and side characters but those that crop up here and there. I have a list of names the kids use while they are in school. I do this so when I need to name the kid that Jane thinks is cute in chapter two, I use the same name later on. As my wife would say, “it’s frustrating and confusing if you don’t get it right.”
Another tip:double check! As you go through your own personal edits make sure the names are correct. Compare it to your list and see if they match. If they don’t, fix them. Then make sure your beta readers or proof readers are double checking for you too. Because I know this has happened to me before, you bet my wife looks for it. In fact I did a messy character naming in my recent book and named a side character another name. Lucky for me, my wife grabbed it. I don’t know where that name even came from (it wasn’t on my list) but I made the mistake. I had named Rachel, Nichole. I not only named her Nichole but I spelled it two different ways: Nicole, and Nichole. So double check your spellings too.  It’s always good for others to catch your mistakes before many people do.

If you decide that you want to do a name change mid-writing, make sure you change the name in ALL your documents. If you name your main character Ronald and want to switch it to Neville, make sure you do a name search in your document as well as your character sheet. Also search for any nicknames associated with that character’s name. We don’t want Neville’s friends calling him Ron. Consistency is the key to becoming a great writer.

Mikey Brooks is a small child masquerading as an adult. On occasion you’ll catch him dancing the funky chicken, singing like a banshee, and pretending to have never grown up. He is an award winning author and illustrator. He has published five middle-grade books including the fantasy adventure series The Dream Keeper Chronicles. Some of his picture books include the best-selling ABC Adventures: Magical Creatures and Bean’s Dragons, which will be featured in an independent film releasing at the Sundance Film Festival. He has a BS degree in English from Utah State University and works full-time as a freelance cover designer and formatter. His art can be seen in many forms from picture books to full room murals. He loves to daydream with his four kiddos and explore the worlds that only the imagination of children can create. You can find more about him & his books at: www.insidemikeysworld.com.