In the past couple of weeks I’ve been very conscious of a certain subject that has been driving wedges between friends, family, and otherwise level-headed people. This particular subject has been disputed across the Internet sparking Twitter wars and Facebook flame battles. And let’s not forget the memes. Good god, the memes! The subject I speak about of course is the Warner Bros. movie Batman vs. Superman: Dawn of Justice. 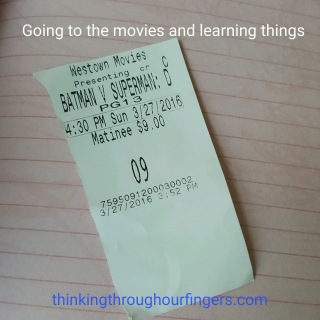 Full disclosure I’ve seen the movie twice: Once with my nerdy kids and the other time with my not as nerdy girlfriend. For each it was a different experience, and I took away a writing lesson that I had not considered until my second viewing. When I saw it opening weekend with the kids, varying in age from eight to twenty-five,  (my sister is practically my daughter so don’t start trying to figure out my age) it was a shared awe of seeing things we wanted to see and plot lines we expected. While on the second view I had to take pauses to explain what was happening on the big screen. It wasn’t a problem for me but I could see how that could be an issue for others.

That brings me to what I learned upon my viewings of the movie. What I managed to take away from the film was that you have to be conscientious of what you’re asking your audience to know, especially if you’re doing a series. Just because you and certain readers may know exactly where you’re going with the story doesn’t mean that it should be universal knowledge.

During the film (no spoilers that aren’t in the trailer) there are no less than four classic Superman and Batman stories going on starting with Man of Steel, even one connected to the Injustice video game from about two years ago. When me and my kids were discussing the movie later we gushed about what we saw and what it means for later movies in the franchise. My girlfriend however wasn’t privy to the back catalogue of nearly 75 years of history between the two main characters. So for her these were just a confluence of events that happened to occur and needed explaining.

While I was writing the sequel to one of my stories I never considered how much back story was being added to it. There was a need to jump back into the story and keep it going. I suppose my thought process was “they would have read the first one”. However if you look at the Harry Potter series there’s no need to read the first book if you happen to jump in on the fourth book as J.K. Rowling spends the first few chapters of each sequential book with the characters remembering what happened before.

So yeah I’m thankful that my own sequel is only a first draft as I now have plenty of work to do. If you don’t see me for a while you’ll know why. When creating a series there may be a need to explain things to your audience. Take it from me or the failings of a certain movie.

Until next time have a writeous day!

Matt Williams is an avid reader, a collector of many pens, an ever improving father of two, and an all-around fanboy. When he’s not wrestling with cats or a long commute you can find him hunkered down writing something imaginative. He’s working on publishing his first book Beyond Here, a middle grade story involving a coma and a singing flower with a bent stem sometime in 2016, along with a few projects with his other daughter.