Some of you may know that I am obsessed with enjoy watching Korean dramas. I know, I know, they aren’t for everyone, but I’ve learned a couple of important writing lessons from watching them. Most importantly, how to end an episode (or chapter) on an emotional or physical cliffhanger—and they don’t always have to be huge, dramatic ones—that makes the audience keep watching (or reading).

In other words, they use ledes and kickers to pull the audience in.

The terms lede and kicker are journalism terms, but they’re a great tool to use if you want to write a page-turner, whether it’s an emotional page-turner or an action-packed one. Basically, a lede (sometimes spelled lead, but that gets confusing with other words spelled that way) is usually the first sentence or two of a chapter that serves to pull the reader in. The kicker is usually a pithy, funny, or gripping final line that “kicks” the reader into the next chapter. Together, the two work to get readers invested in a story and to keep them turning to the next chapter instead of putting the book aside for the night. 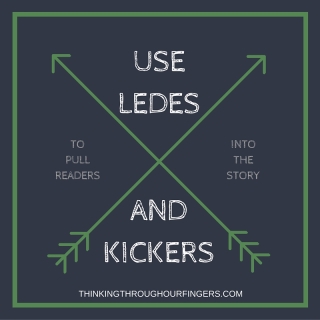 I’ve found that talking about ledes and kickers isn’t nearly as effective as actually looking at ledes and kickers, seeing what others do with it and how they take advantage of the technique. So. The Raven Boys by Maggie Stiefvater has some excellent examples of them. To start out, the first sentence of the prologue is:

“Blue Sargent had forgotten how many times she’d been told that she would kill her true love.”

This is the kind of first line that makes you sit up and pay attention. It pulls you right into the story. And then the last sentence of the prologue (which nicely mirrors the lede into it) is:

“You’re Maura’s daughter,” Neeve said, and before Blue could answer, she added, “this is the year you’ll fall in love.”

Together, those lines have a big impact, and that last line then “kicks” readers right into the first chapter where the first line is another great lede:

“It was freezing in the churchyard, even before the dead arrived.”

That chapter ends with:

“There are only two reasons a non-seer would see a spirit on St. Mark’s Eve, Blue. Either you’re his true love,” Neeve said, “or you killed him.”

This sentence drives home everything that has preceded it in the chapter (and it’s a great chapter) and reader scramble to turn the page to find out which it is: is the boy she saw her true love? Or does she kill him?

I’ve found that many of the best paced novels I’ve read employ this lede-and-kicker technique throughout and the more I pay attention to it, the easier it is to do in my own writing, the easier it is to get a feel for what lines have the most impact and when to end a chapter. For a book that does ledes-and-kickers really well, I highly recommend Steelheart by Brandon Sanderson.

Jenilyn Collings loves to read and write things that are humorous or romantic (preferably both). She has worked as a dental researcher, a florist, a martial arts instructor, and a tracker at an alternative high school (she’ll leave it to your imagination what that entailed), but she’s now focused on writing and child wrangling. A long time resident of the Mountain West, she recently moved to New England with her family where she is gaining an appreciation for umbrellas, fall colors, and turning lanes while driving.