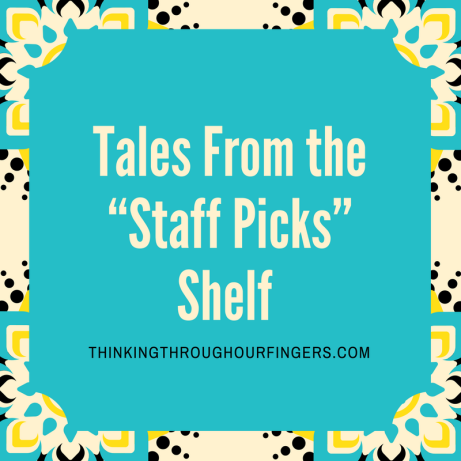 I’m a huge fan of the “Staff Picks” shelf at my local library. Whenever I go, I always make sure to see what’s new and being recommended, and I usually will come home with a book by author I’m unfamiliar with, or even a genre I don’t normally read. And while I’m all for gathering reading recommendations from trusted friends and family, I’ve personally had great success by trusting the suggestions from this particular shelf.

For instance, I had heard of Jim Butcher and Brad Meltzer before, but it wasn’t until I saw their books on the “Staff Pick” shelf one day that I decided to give them a try. And I’m glad I did, because I found two authors in two wildly different genres (urban fantasy and political thriller, respectively) that I came to enjoy.

Some of my happiest finds on the “Staff Picks” shelf, however, have come from books and authors who I was completely unaware of beforehand. In those moments, I judged the book by its cover, and rolled the dice. It is some of those treasures I’d like to share today. These are some of the books and authors I always refer people to now when they ask me who they should try reading.

First on my list is A. Lee Martinez. I came across one of his books years ago, and became such a fan that I read his entire back catalog inside of two months. Lee writes sci-fi/fantasy/horror comedy in the style of Douglas Adams with a little Terry Pratchett thrown in for good measure. All of his books are stand alone stories, and feature memorable characters in richly detailed settings, with smart dialogue. I always try to steer folks towards Martinez, and among the books I would recommend trying are:

I grabbed Andrew Fox’s The Good Humor Man off the shelf based off the cover art—which shows a pair of futuristic police boots crushing some Cheetos—and the subtitle: Or, Calorie 3501. The story is set in a dystopian future where junk food has been outlawed, and “Good Humor Men”—so called for their use of re-appropriated ice cream trucks—prowl the city looking for anyone who is eating unhealthily. All forms of junk food are summarily destroyed, and offenders are thrown in jail. In this health conscious world, fat is equated with evil, and a cultish religion has emerged where parishioners worship liposuction. Louis, a former liposuction surgeon turned Good Humor Man, begins to question his vocation when a raid on contraband cheese turns deadly. Can the jar of fat Louis’ father secretly removed from Elvis Presley decades earlier hold the key to saving all of humanity?

(I would also recommend Fox’s Fat White Vampire Blues, which takes the sexy vampire mythos and tosses it out the window. Jules Duchon is a vampire in New Orleans, but is morbidly obese because Americans are so high in cholesterol. There’s nothing sexy or sparkly about Jules, who has to work at night as a cab driver to earn a living.)

I chose The Fictional Man by Al Ewing because I needed something to read on a flight. As it turned out, this book became the highlight of my entire trip. Set in an alternate present where cloning is commonplace, nearly all actors in Hollywood are “Fictionals,” or genetically engineered copies of their fictional counterparts in stories. Thus, there are multiple copies of Sherlock Holmes running around, for instance. It’s the highest hope of all writers to have their characters immortalized as a real life Fictional. Niles is a struggling pulp novelist with writer’s block who is tasked with writing a film adaptation of a trashy spy novel. The deeper Niles gets into the story within the story within the story, the more layers unfold, and the more the truth is revealed to be stranger than fiction.

Laura Marx Fitzgerald’s Under The Egg was a book I wouldn’t ordinarily have read. It’s a middle grade novel, a genre that doesn’t usually spark my interest. But I was feeling adventurous one day, and looking for something different. What I found was a smart story about a young girl in New York who goes on a National Treasure-style hunt across the city to solve a mystery that may just save her whole family. This book was a refreshing reminder to me not to be afraid to venture outside the safe and familiar genres I normally read, and that a good story is a good story, regardless of genre.

I hope you might give some of these authors and books a try like I did, and I hope you enjoy them as much as I did. I also hope that no matter what genre you prefer to read, you occasionally step outside that genre and read something you wouldn’t ordinarily. Even if you never become a die hard fan of a different genre, the experience can serve to broaden your perspective and flex your imaginative muscles a little. Now, if you’ll excuse me, I’m off to see what picks are being recommended for me this week. Happy reading!