Apparently the first rule of Write Club is “don’t talk about your writing.” Over the years I’ve heard this message from so many people in so many different ways that I’ve come to accept it as a cultural norm in writing communities, and it’s most common in writing workshops.

This injunction can come as a simple charge, like this one from Ray Bradbury.

It can be a more complicated personal narrative about the power of a secret.

Or it can be broad all-inclusive “truthy” assertion like this one from Mark Slouka:

“If writers agree on anything — which is unlikely — it’s that nothing can damage a novel in embryo as quickly and effectively as trying to describe it before it’s ready.” Mark Slouka

My problem is that I don’t agree with any of the above. I am sure there are plenty of people who would rather I don’t talk to them about my writing, but conversation is one of my primary heuristics.

Before I get too far into this line of thinking, let me say that the writing—and by this I mean the actual composing part of it—is something I have to do in solitude; however, I do prefer to work on concepts and planning in my fiction through conversations. I love to riff, argue, spitball, test ideas, hear how they sound, throw ideas against the wall and see what sticks.

I’m sure some of this comes from my background in theater (that was eons ago in high school) and from my improvisation time as a musician gigging in grody Oklahoma college bars. The interplay of ideas that comes from collaboration and impromptu “jamming” turbo-charges my creative process.

The idea that writers only work alone in seclusion never struck a chord with me, and it never really worked when I tried it, even though my graduate creative writing workshops indoctrinated me to the idea that at best it was in bad form to talk about a work in process, and at worst doing this thing would cast a hex upon your work.

I’ve heard all kinds of rationales about the taboo. Some said you can’t talk about a story, it’ll drain your energy. Others said it’ll make it so you no longer have the drive to tell it. Then, it’ll kill the mystery. The magic has to go into the page. Yadda-yadda. All of this fretting made me feel like Ralpie from A Christmas Story having everyone tell him he was going to shoot his eye out.

I was swiftly, deeply, and thoroughly indoctrinated into this world view and went through years of thinking that the way I wanted to do things (talking) was doing it wrong. I was a film major as an undergraduate, so I thought maybe I just didn’t know any better. Associating with them would allow me to learn their mysterious ways.

This isn’t to say that we didn’t talk to each other in graduate school, quite the contrary. You could gossip, kvetch, chew the fat, ruminate, complain, fantasize, chatter, chinwag, yammer, and shoot the breeze, but don’t talk about what you’re writing. You were supposed to just bring it to workshop, the way a cat brings a bird to its people: walk in, open your mouth, drop the thing on the ground, walk away.

Once I was out of school and began to get clear of my programming, I started talking over my projects with my wife. She’s an art teacher and a voracious consumer of audio books. I found that she was the best spitballer in the history of the world. Her literary sensibilities are a sharp two-edged sword for the dividing asunder of the crap ideas from the good ones. She has no dog in the writing hunt, so there was no risk of professional envy or gatekeeping. I could pitch ideas, and she would say, “I like it,” or more often than not just tell me (with no sugar coating), “You can’t do that, everyone will hate it.”

For a long time writing conversations were my secret. I didn’t want other writers to know that I worked this way, until I discovered that George Lucas, Lawrence Kasdan, and Steven Spielberg recorded a spitballing session as they roughed out the script for Raiders of the Lost Ark. Learning about this and reading through the transcript was absolutely freeing. I was, like, “These guys did made this amazing thing and they did not shoot their eye out!”

I know this is how movies and television get made (I’m a film major, remember), but the myth of the lone novelist was a hard one for me to overcome. It was good for me to learn about this Raiders business, but more importantly, I feel like allowing myself to work collaboratively helped me immensely when I started working with an agent who was sending me notes and working with me select my next next project. I’ve got to think that for many solitary, non-verbal, non-sharing writers that transition to working with others can be jarring.

I understand that writing a novel is not like playing on a basketball team or jamming out with a band. It is also not like living in exile on a water planet in some forgotten corner of the galaxy.

Writing is an act of communication, and it’s good to make sure you’re always thinking about how your ideas, sentences, and words are going to hit people. This is a hard thing to achieve if you’re always interacting some imagined, idealized reader. Human interactions can tell you so much more and can get you further faster. Conversations can ease writers out of the solipsism that overshadows so much of the work. I know this blog is called Thinking Through Our Fingers, but for the record, I want to say that I actually do a lot of my thinking with my mouth. 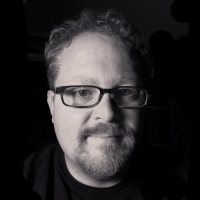 Todd Robert Petersen is the author of LONG AFTER DARK  and RIFT. Originally a YMCA camp counselor from Portland, Oregon, Todd now directs Southern Utah University’s project-based learning program. You can find him online at toddpetersen.org and @toddpetersen for tweets and Instagrams.

One thought on “Talk it Out”