Lack of character authenticity is the trap door of the literary world. Readers can be skipping along, humming cheerfully to themselves as they explore a lovely story and then whoosh! Down they go. Because a character did something inauthentic. Because suddenly, NOTHING MAKES SENSE ANYMORE.

You can have the most FLAWLESSLY crafted plotline in the whole history of bloody creation, but if character motivations and actions don’t line up, IT WILL ALL BE FOR NAUGHT.

I’m using a lot of caps-lock here so you know this is serious stuff. 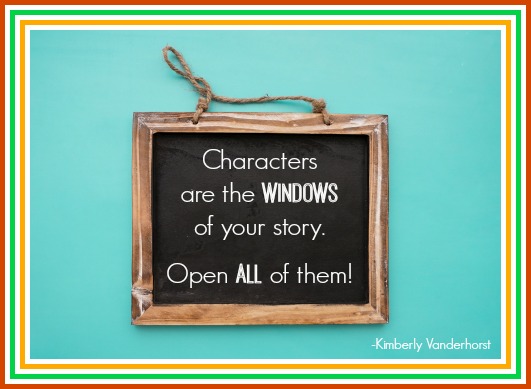 This. Is. The. Worst. Sometimes, we get such a firm vision in our minds of how the story is supposed to go, we forgot that the plot isn’t the only path that needs to be followed.

Picture yourself as a builder of roads, except you’ve got to lay two roads at the exact same time: the plot road, and the character road. These roads should never diverge from each other, no matter how many obstacles your character comes up against. What we sometimes see is a straight plot road with the character road wibble-wobbling all over the place. Those wibble-wobbles are the places where your main character is making no sense whatsoever.

For instance: Despite having been a complete coward thus far, the main character runs toward the bloodcurdling scream. Out of curiosity. I’m sorry, but cowardly people do not run toward bloodcurdling screams. It’s not in our nature. True story. I actually heard one once. And no, I’m not proud of the fact that I froze, wondered if I should call 911, and then decided everything was okay when the screaming turned to laughter.

Someone might have been tickled to death because of me. I will carry that shame with me for the rest of my life.

Say you need your main character to run in that direction. Pause for a moment and consider what motivation would be required. Perhaps they have reason to believe someone they care about is doing the screaming? Perhaps they finally mastered their power and are ready to kick bad guy behinds now? Perhaps they think it’s a television set playing a favorite horror movie they’re keen to see? Whatever the reason—make it a good one.

Another example: Your main character decides to go somewhere with a hot stranger who’s giving off a dangerous vibe. I see this situation in a lot of fiction for teens and frankly, it ticks me off. Just because a teenage girl thinks a guy is hot, doesn’t mean she’s going to ignore the warning signs and toss aside all the advice her parents have been hammering into her head since she was three years old. She’s much more likely to play the “Stranger Danger” card and make a run for it.

It comes down to who your character is, how they were raised, what their basic beliefs are, and how they react in difficult situations. And don’t forget the crucial element of what’s happened in your story up to that point. A character who’s been put through the emotional wringer will react differently than one who’s had a pretty happy go of things so far.

Consider the emotional angles of each scene. People don’t always make sense, looking from the outside in. But if you’ve got a decently deep POV going on (something I highly recommend), your reader will be looking at the story from the inside, which makes emotional authenticity all the more crucial.

Does your best friend/sidekick character blithely go along with whatever the main character says, seeming to possess no free will or independent thought of their own? Do the parents never worry about their teen’s whereabouts? Can your adult main character skip work without their boss making a stink?

I sometimes mollify myself with the thought that these secondary characters might turn out to be cyborgs, but I am almost always disappointed. Usually, they’re just cardboard cut-outs of the people they could have been if the author brought them to life properly. Thankfully, there are ways to avoid this:

Your reader doesn’t have to love the decisions your characters make, but they do need to understand them to a certain degree. All of your characters should be three dimensional, flawed human beings (unless you’re writing about aliens, in which case, more power to you). In other words, THEY SHOULD BE LIKE YOU (unless you are an alien, in which case, AWESOME. Let’s do lunch).

Nail shut the trap doors in your story. Build your roads as parallel to each other as you can. And don’t mix your metaphors the way I always do. It’s kind of lame.

Kimberly VanderHorst is a YA author who cherishes a love for all things quirky and strange. Claims to fame include running Prism Editing, co-hosting the annual Pitch Slam contest, and serving on the committees for the annual LDStorymakers Conference and The Whitney Awards program. Despite being a city girl with a tendency to cuss a lot, Kimberly is married to an LDS minister and lives in rural northern Canada. There, she helps raise their four lovely daughters while pretending not to be afraid of the neighbour’s chickens.