I’ve met a lot of penguin lovers in my day. They all have one thing in common—the persistent delusion that all penguins are cutesy-wutesy like this:

Or elegant, dashing creatures (the James Bonds of the ornithological world) like this: 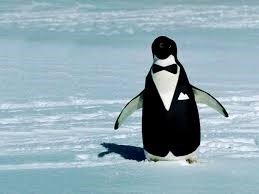 Personally, I’m not a fan. With their ominous waddling, and their “claim” that they can’t fly—not to mention those beady little eyes—I’m only one small step away from having a full-blown phobia of the dastardly creatures. Because in my imagination (and in real life, people), they sometimes look like this:

Now, I’m a pacifist by nature so I’m not suggesting we do anything about this blatant threat to humankind. But I’ve found a very effective stress relief method that keeps me stable as I wait for the inevitable invasion.

A few years ago, while working on the first draft of a new story, I found myself wanting to move forward despite not having finished the section I was working on. I decided to put in a unique word that I’d cut out of an early chapter, and then “search” for it later. As I continued with the draft, I used the word more and more often. When I needed to do more research. When I hadn’t figured out certain details about a character yet. When someone or something needed a name and it just wasn’t coming to me right away.

After I finished the draft and was ready to tackle revisions, I typed the word “PENGUIN” into my search bar and whispered “Find the penguins” at my laptop. If you think that’s super weird, we are obviously not well-acquainted. On the Kim Scale of Weirdness, this is small potatoes (which is sad, because I love potatoes).

Basically, I’m the Elmer Fudd of the literary world, except instead of hunting “Wascally Wabbits,” I’m hunting “Pernicious Penguins*.”

Writing is mentally exhausting, and sometimes we have to trick our brains into doing it. My brain likes to throw “But what about . . .” stumbling blocks at me as I draft, and penguins have proven to be an unlikely (but very effective) cure. Unfortunately, brains are clever creatures (they’re known for it), and what works for one writing session doesn’t always work for others. Here are some other Tips and Tricks I’ve picked up along the way.

How about you? What cool things do you do to trick your brain into churning out words?

*No actual penguins have been harmed. Not even the vicious, probably-man-eating ones. Promise.

Kimberly VanderHorst is a YA author who cherishes a love for all things quirky and strange. Claims to fame include running Prism Editing, co-hosting the annual Pitch Slam contest, and serving on the committees for the annual LDStorymakers Conference and The Whitney Awards program. Despite being a city girl with a tendency to cuss a lot, Kimberly is married to an LDS minister and lives in rural northern Canada. There, she helps raise their four lovely daughters while pretending not to be afraid of the neighbour’s chickens.