The Writing for Charity conference took place this past weekend, packed with amazing panels and speakers and a wealth of writing advice. One of the panels I attended was on how to power through the perils of a first draft. The advice was so valuable, I wanted to share a few of the best tips from the discussion. 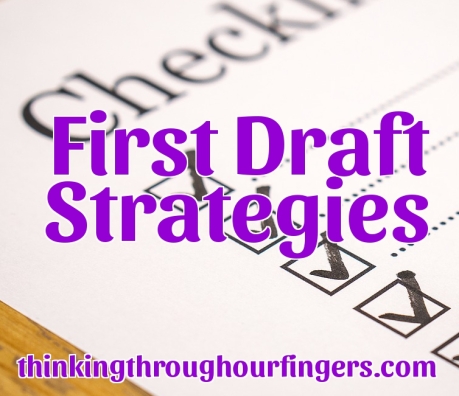 How much groundwork is necessary before starting a first draft? Writers tend to fall into two main camps on this topic. Minimalists, or discovery writers, prefer to jump right into drafting with little more than an idea to build from. Outliners, on the other hand, generally take a more organized and logical approach. But whether you are a pantser or a plotter, all of the authors agreed that some prep work makes the drafting process easier and more productive.

Creating even a basic outline can reveal so much about your project, including character motivation, conflict, the heart of the story, and even your elevator pitch. The extent of the research and planning that you do ahead of time will depend on your genre, topic, and intended audience.

But, Elaine Vickers reminded us, at some point it’s okay to let go of your inner perfectionist. Too much time spent outlining can become an excuse to put off the actual writing.

The subject of setting goals generated plenty of input. Lots of people say they want to write a book, but so few actually finish one. “I think we have more time than we believe,” McKelle George told us. But she also argued that there will be things we need to give up, sacrifices we need to make, if we’re really serious about finishing. It takes focus and hard work. Moving past the fear of starting can be the single biggest obstacle.

Setting small, attainable goals is key, such as hitting a certain word count, or finishing a chapter or even a single page. Joining an online writing event such as NaNoWriMo can provide the urgency needed to get started and stick with it.

All of the authors recommended setting weekly goals rather than daily ones. When our writing is interrupted by normal, day-to-day obligations (or unexpected surprises), the chances of meeting a daily goal can evaporate in an instant. The resulting effect on morale can derail our progress—and our confidence.

Getting started on a first draft is challenging enough, but maintaining momentum is another issue altogether! Some of the panel members use rewards such as treats or stickers to track their progress. Nancy takes it a step further, buying herself an expensive present that is specifically tied to the book she’s working on. It’s something she can enjoy throughout the writing process and even refer to for inspiration.

Others admitted that physical incentives just don’t work for them, but that meeting an external or internal deadline can be a reward in itself. Writtenkitten.com was mentioned as a site that shows you a picture of a kitten (or puppy or bunny) every time you write a certain number of words. This is one I’ve put on my list of things to try.

Creative satisfaction can be its own kind of motivator. Kristen Chandler feels compelled to make sure a character in her head is able to be fully realized on the page. “That character doesn’t get to be a person unless I finish,” she said. “I have to care more about character than self.”

Finally, they emphasized self-care as an essential tool. Elaine stressed the importance of critique groups for support and motivation, and reminded us to be gentle with ourselves throughout the process. McKelle suggested eating a little healthier, going for a walk, or even taking a nap to recharge.

“Drafting is a mental marathon,” Emily said. “You have to do things to refill your well.”

Growing up, Christine Hayes loved reading stories about creatures that curl your toes and legends that send a shiver down your spine. Now she loves writing about them, too. Her debut novel, MOTHMAN’S CURSE, was released in June 2015 through Roaring Brook Press/Macmillan. Christine seeks inspiration by haunting flea markets and estate sales, searching for cool vintage finds with a story to tell. While earning her degree in music she visited Asia for the first time, and later moved there with her family for several years. She has been addicted to travel ever since. Christine and her clan now live in northern Utah. Find her online at www.christinehayesbooks.com.