We writers are constantly trying to hone our craft and improve our storytelling skills. One of the best ways to do that is to study the ways other people tell stories. A good writer will look to a variety of storytellers for ideas, inspiration, and instruction. Being able to understand why a good story works is immensely helpful when trying to write our own.

An often overlooked storytelling form is the TV sitcom. While your favorite weekly sitcom doesn’t appear to have much in common with the YA or Sci-Fi novel you’re working on, there are nevertheless some good lessons that can be gleaned. After all, there’s a lot of storytelling—including multiple plots, character arcs, and pacing—that is distilled and condensed down into a twenty-two minute sitcom episode. One of the best examples is Seinfeld. 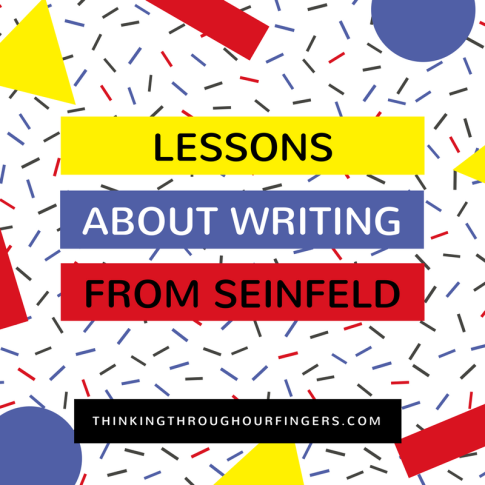 At first glance, Seinfeld shouldn’t work as well as it does, because it breaks many traditional rules of storytelling. For instance, the plots are paper-thin at best. (A whole episode about waiting for a table at a Chinese restaurant? An episode devoted to Pez?) Furthermore, all of the four main characters are selfish, narcissistic, and regularly manipulate others for their own gain. And perhaps most egregiously, none of the characters ever change or exhibit any real growth throughout the series. If I were to give you notes like that about your story, you’d set fire to your manuscript and take up knitting or woodworking instead of continuing with writing. Yet Seinfeld remains one of the most successful TV shows of all time, and continues to resonate with us. It’s a show that has transcended mere pop culture and has entered our collective unconscious. Whatever the situation, there’s a Seinfeld reference for it.

Let’s examine some of the lessons Seinfeld has to offer writers.

You can’t “Yada Yada” your story.

As much as we’d like to just write, “Once upon a time . . . yada, yada, yada . . . and they all lived happily ever after,” we just can’t. Skipping important details will not only confuse your readers and weaken your story, it will brand you as a writer who doesn’t want to do the work necessary to tell a good story. Don’t yada yada over the best parts, especially the bisque.

“In that moment, I was a marine biologist!”

You don’t have to be an actual expert on every single thing you write about, but you can “play one on TV,” as it were. Research is great, but don’t let it take over your story. You’re writing a story here, not a dissertation. You only need to be a marine biologist long enough to get the golf ball out of the whale’s blowhole, and then you can move on.

This is George’s lament when they’re all lost in the parking garage, and they’re walking in circles. The world your story inhabits is important, and it’s critical that your readers not get lost. Keep your readers oriented by giving them a clear sense of where and when the story takes place, and then keep them moving in the right direction. If your readers start to feel like George, your story may be in trouble. Think of the goldfish.

“That’s some pen. Writes upside down.”

Many Seinfeld plots come from characters making seemingly innocuous choices, and then reacting to the fallout from those choices. Jerry admires Jack Klompus’ astronaut pen, which leads to problems for everyone at Del Boca Vista condos. Elaine gives Sue Ellen Mischke a bra as a gift, who then wears it as a top, causing Jerry and Kramer to crash George’s car, which makes the Yankees think George is dead. George answers a personal ad in The Daily Worker, which leads to him being accused of being a Communist. Kramer hits just one golf ball into the ocean, and nearly kills a whale. Your characters will make choices throughout your story, and those choices will have consequences. Show those consequences, both good and bad, and show your readers how your characters react.

“The jerk store called, and they’re running out of YOU!”

George flies all the way to Ohio to deliver what he believes is the ultimate comeback to a former co-worker’s snarky remark, only to be quickly bested again. George gets angry and insults the man’s wife, only to learn she is in a coma. Characters need goals, and they need obstacles to overcome to achieve those goals. The fun comes in watching those characters try to achieve their goals, with varying degrees of success. But so often in the Seinfeld world, a character achieves a goal, only to instantly regret it. Thus, Jerry finally dates a woman he’s always liked, who immediately turns out to be racist and an anti-Semite. Kramer turns his door’s peephole around, and becomes increasingly paranoid. What happens to your characters when they finally get what they’re after? Does it make their lives better or worse?

Keep it real, and keep it spectacular.

You’re not writing to impress your AP English teacher anymore, so cool it with the flowery prose and pseudo-scholarly shtick. Readers are smart, and can tell when someone is being pretentious. If your voice isn’t authentically you, your readers will spend their whole time wondering how they can figure out who the real you is. Your voice is unique and important, and only you can tell your particular story. Your voice can be spectacular on its own.

Ultimately, Seinfeld continues to work because it wasn’t really a show about nothing, it was a show about us. If the purpose of art is to hold a mirror up to reality, then surely Seinfeld’s was a warped fun house mirror. Nevertheless, we all see something of ourselves in there. We recognize aspects of Elaine in ourselves when we try to dance, and of Kramer when we are feeling clumsy. We have wrestled with George’s insecurities and neuroses, and we often wish we could be as carefree and aloof as Jerry. These characters do and say things we sometimes wish we could do and say (or things we’re afraid we’ve done and said!) Your story’s core needs to be centered around flawed, yet well-written characters, too. We need to recognize something of them in ourselves, and visa-versa.

Maybe the biggest lesson for writers from Seinfeld is that it is possible to break the rules and still have a good story. So the next time you’re channel surfing and you stumble across a rerun like Seinfeld, give it a closer look. Watch it with a critical eye, a writer’s eye, and see if you can spot some of the lessons I’ve mentioned here. See if you can recognize how the characters, the multiple storylines, and the breakneck, almost haphazard pacing all combine to make one of the most unique brands of storytelling of the last twenty-odd years. And once you’ve done that, head back to your manuscript with what you’ve learned and giddy-up!
_____________________________