First, a disclaimer: The Netflix series Stranger Things may or may not be suitable viewing for your middle-grade-age child. That’s totally your call. The aim of today’s post is to highlight the winning elements that Stranger Things and middle grade fiction share in common.

If you haven’t yet seen or heard of Stranger Things, it’s a sci-fi/horror television series that has won over millions of fans. A boy named Will goes missing in a small town, and his three best friends are determined to find him. They’re aided by a mysterious girl called Eleven, who possesses supernatural powers. Viewers learn that Will has become trapped in a terrifying alternate world called the Upside Down. Set in the 1980s, the show is awash in nostalgia. A constant thread of tension runs through every episode thanks to a gripping story, heart-pounding action, and plenty of atmosphere. Season 2 premieres in October. 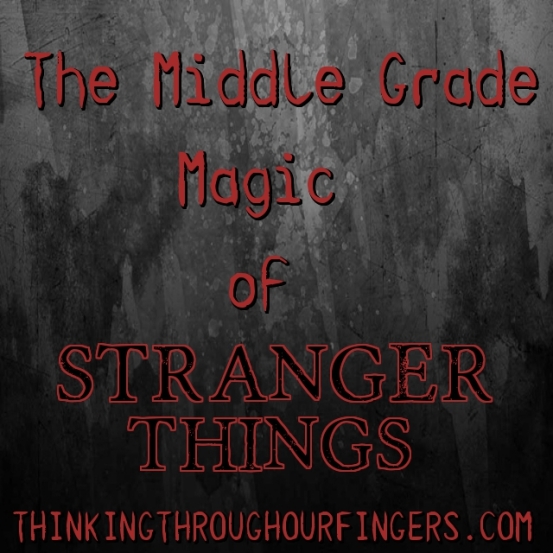 The series was created by the Duffer brothers, twins Matt and Ross. Through a recent TV interview I learned that their creation was largely inspired by the 1980s films and books they were exposed to as kids, including classics such as Ghostbusters, E.T., and Poltergeist, as well as the stories of Stephen King. They began making their own amateur movies as early as the third grade.

These stories captured their hearts and imaginations at a critical age. Many of my all-time favorite books and movies are the ones I fell in love with between the ages of 8 and 13. In these formative years, perhaps more than any other, such influences help shape who we will become—our heroes, our values, our likes and dislikes, fears and interests.

Middle grade has been called the “golden age” of fiction because it’s often full of magic and adventure, without being weighed down by some of the more serious issues that older readers face. I find it fascinating that the creators chose to tell the story mainly from the perspective of kids who are around 12 years old. Granted, the series does include more mature themes such as violence, teen sex, and drinking (all involving older characters). But the kids have to solve their problems as real kids would. They get around town on their bikes. They deal with bullies. Parents are often absent, distracted, or otherwise occupied (including Will’s mom, who is fighting her own demons while trying to get her son back). And as the adults initially try to solve Will’s disappearance through traditional explanations, the kids are more open-minded and willing to consider other possibilities. They are brave, resourceful, and frequently hilarious.

Well-crafted middle grade fiction requires authenticity. It should be rich in both plot and characters. It needs a great hook, tight pacing, at least a little humor, and the eventual triumph of good over evil. Characters are meant to explore and test their limited independence. They get a taste of the wider world, with both the freedoms and dangers it possesses. All of these elements are present in the superb artistry of Stranger Things.

In the end, no matter the audience, it all comes down to good storytelling. Stranger Things is a source I plan to return to again and again for examples of how to get it right.

Growing up, Christine Hayes loved reading stories about creatures that curl your toes and legends that send a shiver down your spine. Now she loves writing about them, too. Her debut novel, MOTHMAN’S CURSE, was released in June 2015 through Roaring Brook Press/Macmillan. Christine seeks inspiration by haunting flea markets and estate sales, searching for cool vintage finds with a story to tell. While earning her degree in music she visited Asia for the first time, and later moved there with her family for several years. She has been addicted to travel ever since. Christine and her clan now live in northern Utah. Find her online at www.christinehayesbooks.com.</div