The best bit of writing advice I’ve heard in ages came from a podcast that isn’t about writing at all. It’s about Hollywood and the film industry and I listen to it every day and I’m endlessly fascinated.

But two weeks ago as I listened, I was absolutely lit up with a sense of recognition, of having truth confirmed.

Listen to The Frame. It’s interesting. But this episode in particular was riveting. You don’t need to know any of the actors or shows involved to understand the beauty of this thought:

The episode featured an actress named Ann Dowd who was a feature character named Aunt Lydia in the series The Handmaid’s Tale, which I had just finished watching. Her character is odd and compelling and hard to hate as outright as you might think you should at first glance.

The host, John Horn, asks her about her process in bringing this complicated character to life. She responds: 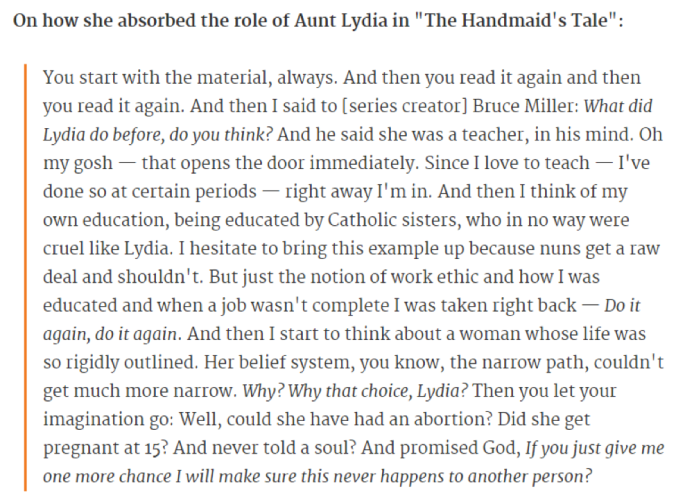 But what’s even more compelling—the lightbulb moment—is Horn’s follow up:

THEN HERE’S THE KICKER:

When Ann Dowd acknowledges that this is the hope, Horn adds this: “That is the hope, that if you’ve imbued all that history into your performance, that they will see…what you’re bringing to the part that’s not just the dialogue and moving from Point A to Point B.”

What they are both also describing is what it takes to write an authentic character, an authentic story, and that you need to know and work through all of the stuff that will never show up on the page but that your readers will feel nonetheless. They’ll also feel it if you don’t do the work. YOU need to know the backstory, but you don’t need to give most or even much of it to the reader. If YOU feel it, it will all manifest in the story anyway, but think of Horn’s word imbue. It will imbue your story instead of beating your readers over the head. And it will feel real and organic and authentic. But to Ann Dowd’s point, you have to do the work. You have to be willing to write pages and pages that may never make the story just so you can put their essence into the pages you DO use so that they come alive.

There are no shortcuts. But magic is possible if you cast the spells with your own sweat and tears. 😊

Melanie Bennett Jacobson is an avid reader, amateur cook, and shoe addict. She consumes astonishing amounts of chocolate, chick flicks, and novels. She lives in Southern California with her husband and three kids and a series of doomed houseplants. Her seventh novel, Southern Charmed, released in October. Melanie is pursuing a Masters degree in creative writing from the Vermont College of Fine Arts. Her contemporary YA novels are represented by Alyssa Henkin..

One thought on “You’ll Never See It on the Page”